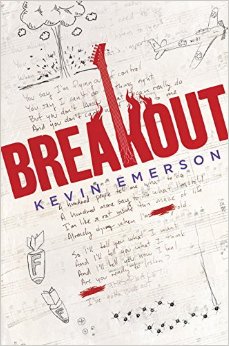 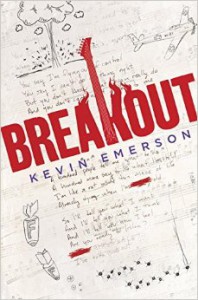 Some adolescents attempt to break out of the traps they perceive in their current life conditions by acting out; others use creative outlets like music to escape.  Breakout by Kevin Emerson follows the story of fourteen-year-old Anthony Castillo and his best friend Keenan on a twelve day journey to Fall Arts Night in Seattle, Washington.

Prone to hyperbole, Anthony plays lead guitar in a band called the Rusty Soles, and Keenan plays bass.  Both boys attend Catharine Daly, a K-8 school in which the eighth graders are expected to lead by example.  Anthony takes exception to that nearly impossible expectation by suggesting that eighth graders are instead “made to battle in the trenches between being a kid and being a teen” (8).  Comparing the tween years to “being stuck under the ice in a frozen pond” (8), he can see up through the glassy surface of adolescence but feels powerless to break out.

Because Anthony and Keenan play a multiplayer online game called Liberation Force 4.5, which takes place during World War II, many of the analogies employed by Anthony reference this game, a metaphor for life with its challenges, enemy fire, conflicts, and levels.  But there are no secret tunnels out of eighth grade, only “dust and rubble and screams and pain” (18).

Girls add a unique layer of pain by creating turmoil for the two boys, whose pattern of hanging out and conversing candidly is interrupted by cute-bots, who try to look perfect and plastic, like Polly Pockets.  Adults, too, wielding power with their rules and expectations, make Anthony feel like a prisoner of war, a stalag inmate, when all he wants is to be treated like who he could be instead of what he isn’t.

The only safety Anthony finds is in artistic expression.  Time spent in Rock Band with Mr. Darren makes him feel better.  The energy and volume of the music connects to his emotions, erasing the angst, replacing it with competence.  Anthony compares the ability to hear E and A notes everywhere in the world to “having a superpower or knowing a secret code” (27).  A reflection of emotion, music releases him, pushing away the angry walls that trap him and allowing him to say what is on his mind.

When Anthony resists authority and gets in trouble at school, he has to pay the consequences in what he considers a cruel form of house arrest.  While in his room, angry and trapped by powers not always in his control, Anthony hears words and a melody that feels true.  Inspired, he records the lyrics while strumming quietly on his guitar with his comforter over his head to muffle the sounds.  Tapped into his core, Anthony creates a song with powerful and accurate words to describe the trapped sensation of being “too old and too young all at once” (90).   Filled with angry energy and intensity, the song contains a couple of f-bombs.  Whether the song is “something magical or terrible or stupid or perfect” (93), Anthony isn’t sure, especially when others take his idea and transform it into something else.

For the remainder of the book, readers journey with Anthony as he struggles with what to do with the beast he has unleashed: perform the song or censor it; assume grown-up responsibilities like audience awareness or sell-out genuine feelings?  The liberating song that Anthony created to capture his feelings ends up further trapping him.  Conflicted, he oscillates between whether to abide by school rules—to be safe, boring, and not offend anyone—or to sing the words that are true, expressing emotions that are real.  Should he “be the singer who sings the lyrics that matter when it matters most, who goes for it no matter what the cost, who takes the big risk for the big payoff and says what’s on everybody’s mind” (208) or not?  The static in his head and intense pressure grow unbearable until Showtime.

With this novel, due out next month, Emerson felicitously captures the conflicted tween years, comparing them to a multiplayer online game, where adolescents must fight level by level, slowly getting to adolescence.  Emerson also explores the power of words, their meaning and impact, as the battle continues in the next campaign.