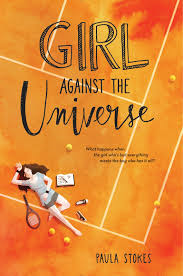 Girl Against the Universe

By: Jacquie
In: Realistic Fiction (YA), Young Adult Book Reviews

Maguire is a magnet for bad luck. Everywhere she goes, something horrific happens to the people around her. Her bad luck started when she was just eleven years old. She was riding in the car with her father, uncle, and older brother when her dad lost control of the vehicle and had a severe accident. Maguire was the only survivor of the car crash; in fact, she walked away from the accident with nothing more than a scratch. A year later, Maguire went to an amusement park with friends. While riding a rollercoaster, there was a sudden crash and every passenger was seriously hurt, except Maguire. A couple months later at a slumber party, all of the girls were violently sick with food poisoning, except, once again Maguire, who was then blamed for poisoning her friends. These series of events led to her mother moving them to a new town, with a fresh start.

Maguire’s fresh start was complete with a step dad and two half-siblings. Her new town included a tight knit high school, where her peers stuck with their cliques. This didn’t bother Maguire because she was convinced she had a curse set upon her. She knew that being around other people would only cause them harm, which motivated her to be content with staying in her room reading and studying.

Her life begins to change when Maguire’s mom insists she starts to see a therapist. Maguire is intent on not speaking to the therapist; she promised her mom that she would see him, not talk to him. However, after each session, she continues to run into a boy, a very cute boy, in the waiting room. Before she can avoid him, Jordy, the cute boy, introduces himself and their friendship begins. Jordy not only befriends her, but opens her eyes to the comforts and benefits of therapy. He is convinced he can help Maguire break her curse and even helps her with her tennis serve simultaneously.

However, just as life seems to turn positive for Maguire, she is hit with reminder that she is cursed and so are the people who chose to be around her. Being grounded, hospital visits, and another car accident are just a couple experiences Maguire will face again.

Readers will enjoy this realistic fiction novel that challenges a sixteen year old to find herself, face her fears, and discover what hard work and love can accomplish. This novel is recommended for young adults who are interested in realistic fiction, drama, and romance.