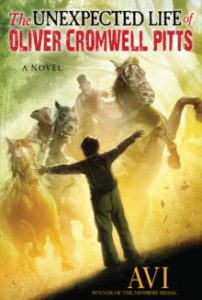 Set in 1724, The Unexpected Life of Oliver Cromwell Pitts by Avi tells the story of the Cromwell family living in Melcombe Regis, a small community on the southern coast of England.  Because his mother died during childbirth, Oliver forms a strong bond with his sister, Charity, who comforts and cares for him.  Their father, overwhelmed by grief at the loss of his wife and generally intractable, repeatedly lets his children down so that Oliver and Charity are often disappointed by their father’s poor parenting and wish for an instruction book on how to deal with inept parents.  Besides his drinking, gambling, and bad moods, Gabriel Pitts argues with everyone and has made many enemies in his profession as a lawyer. When Oliver turns twelve and is old enough to care for himself, Charity leaves for London, hoping to find a more comfortable home but promising to send for Oliver once she is settled.  Charity lives up to her name, until she doesn’t.

Many months later, when Gabriel receives a letter from Charity, he rushes off to London.  Because his departure coincides with a devastating storm that damages the family home and renders unreadable the note he left for his son, Oliver is now penniless, fatherless, and homeless.  In his efforts to avoid the poorhouse, Oliver experiences a series of unfortunate events.  Every forward motion is thwarted by an adult—Mr. Bartholomew, Oliver’s father’s principal enemy, the customs master, and a smuggler himself; the cruel Mr. Probert, headmaster of the poor house who strips Oliver of “the appalling name of Oliver Cromwell” (78) and humiliates him; Mr. Sandys, a highway man; Captain Hawkes, “the perfect portrait of a polite gentleman” (174) but a rogue and a villain; Mr. Jonathan Wild, a truly wicked thief who pretends to be on the side of the law but betrays and exploits many with his criminal mastermind.

His preferences never consulted and his true feelings masked with false smiles, Oliver uses his wits to free himself of his tormentors.  When in the face of danger, he realizes he is doomed unless he risks something, so each time someone takes charge of him, Oliver is resolved to regain his liberty.  As readers accompany Oliver on this journey fraught with adversity, they will discover Oliver’s varied degree of success and whether he will be locked into a life of crime or in a prison.

The sequel to The Unexpected Life of Oliver Cromwell Pitts promises not only additional encounters with scoundrels and treachery but more lessons for Oliver, lessons like those he learns in this installment:

Avi’s fictional account of Oliver’s life is an adventure that captures some of the history of Great Britain during a time of lawlessness, when London was a city plagued by crime and people were sent to their deaths, often for trivial transgressions, or sentenced to transportation to the American colonies to live as slaves.