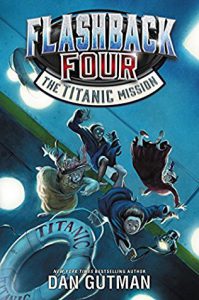 April 15 will mark the 105th anniversary of the historic event of the Titanic’s sinking, an event which is memorialized in Dan Gutman’s latest installment of The Flashback Four: The Titanic Mission.  Gutman preserves the Titanic’s history, as well as that of 1912, in a retelling that features four twelve-year-olds: Luke, a large white boy with a touch of Attention Deficit Disorder and a compassionate heart; Julia, a prep school blonde with a penchant for money, clothes, and risk-taking; David, a tall African American boy who never learned to swim but loves to laugh; and Isabel, a studious girl from the Dominican Republic who prefers to play by the rules.

The Flashback Four have received their codename from billionaire Miss Chirs Zandergoth, who is obsessed with photographs of historical events, especially those that have never been photographed before and can only be imagined from paintings that were made to recapture a representation of the event.  To satisfy her obsession, Miss Z has built an interactive smartboard that can function as a time-traveling device and sends the four pre-teens back in time to collect these “rare” photographs.  Miss Z believes that “anything is possible—even solving climate change—if you have the right technology and enough money to build stuff” (20).   With her wealth, Miss Z creates a TTT device, which enables the Four to Text Through Time, keeping Miss Z abreast of their progress and maintaining an open line of communication.  Although akin to magic, “any sufficiently advanced technology is indistinguishable from magic” (35), according to the famous futurist Arthur C. Clarke.

Despite these attitudes about money and technology, the Four not only learn the limits of technology and money in solving problems but gain a healthy respect for Mother Nature, who proves herself more powerful than anything humankind can build.

On their travels back in time, the Four face immense obstacles to their survival and discover strengths they didn’t know they possessed: making difficult decisions and resisting the temptation to steal or to change the course of history.  They also learn that hindsight is always 20/20 and experience firsthand the futility of “if onlys and buts” and the value in planning, adapting to conditions, and impromptu problem-solving.

Besides telling an adventure story with historical fiction flavor, Gutman’s book is rich with science facts about icebergs, hypothermia, and the physics of time travel; as well as history facts about famous personalities, inventions, baseball, civil liberties, photography, and the year 1912.  Gutman even sneaks in a factoid or two about fashion and art, with the Rubaiyat of Omar Khayyam making an appearance.  In fact, allusions may be the most powerful aspect of Gutman’s novel.