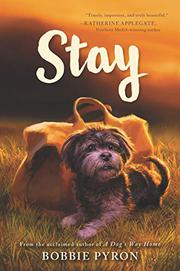 Like a tower built from Jenga blocks, eleven-year-old Piper Trudeau’s former life in Cypress Point, Texas, all comes crashing down after a series of unfortunate events: her parents’ job hours cut, lost jobs, unexpected medical bills, car trouble, bills piling up, and eventually an eviction.  Now, she and her family are homeless and living in a shelter in Idaho—experiencing new places and new people and learning that a rough patch can seem like a “football field full of briars” (39).

But this is only one plot thread in Stay by Bobbie Pyron, a novel targeted for middle grade readers that alternates between the story of Piper’s family and that of Jewel, a mentally challenged elderly woman, and her small dog, Baby.  From Jewel and Baby, the reader learns to value what is really important: food, shelter, play, and love.

Pyron’s book invites us all to see rather than to judge those who are different, to extend grace and understanding to those dealing with the plight of homelessness rather than branding them as lazy, crazy, careless, or deceitful.  Piper’s friend Sapphire tells her “Don’t let noboby tell you who you are because of where you live” (119).

Despite her own hardship, Piper grows to see the beauty in her predicament.  Because she sees not just with her eyes but with her heart, Piper works to make the world a better place.  No longer ashamed of who she is or where she lives, Piper finds a sense of belonging with the local Firefly Girls Troop.  Empowered by a sense of achievement and using her super-power for selling brownies, Piper leads the troop on a service project to rescue Baby from Animal Control and to rejoin him with Jewel.

This is an inspirational book about how social transformation begins with small gestures.  By grappling with issues of social justice and fairness, Piper and her Firefly Girls Troop exhibit radical courage and challenge status quo oppression with civic action—because “everybody needs another heartbeat on their side” (160).