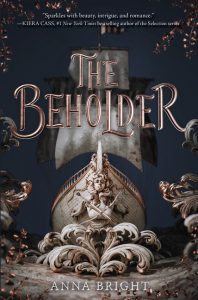 At eighteen years old, Selah is the seneschal-elect of Potomac, which implies that she will soon be the steward of her province’s resources, as well as the person to oversee its courts, its militia, and its administration.  However, as a woman in the historical time in which the Anna Bright’s novel The Beholder is set, Selah will need a man by her side to help her rule, despite her keen mind and kind heart.

As her fiancé, Selah has chosen Peter Janesley, who is brilliant at math and at sports.  However, this smart, earnest, and kind young man rejects the extended marriage proposal.  Given Selah’s public humiliation and claiming to have Potomac’s best interests in mind, Alessandra, Selah’s manipulative and mysterious stepmother who has always been less than kind where Selah is concerned, sends Selah out on an ocean voyage across the Atlantic with the threat to find a husband or forget coming back.

Lang, a daring twenty-year-old, is the captain of Selah’s ship, the Beholder, which is bound for England, then Den Norden, and finally the Imperiya, a gray mass at the center of the world believed to be the territory controlled by the cruel and bloodthirsty Baba Yaga.  In each of these ports, a suitor awaits.  Alessandra has negotiated appointments with multiple royal courts on Selah’s behalf, and Selah is expected to honor those appointments as Potomac’s representative.  Wishing to be a person, not simply a resource to be bartered for peace or trade deals or political alliances for Potomac, Selah stubbornly resists this plan.

Adrift and fearful about her father’s failing health and her “smother’s” scheming, Selah realizes that the tides of history are not hers to command.  If she hopes to get back to her dad and to avoid the Imperiya, Selah has to fall in love and find a man who will stand by her in her rulership of Potomac.

Although some people crave racing, chasing, and crowding one another, Selah—who was raised by nuns and libraries and who cherishes kindness, loyalty, and faith—craves the stillness in written words, in the church, or while gardening.  Not content to be idle or to be waited upon, Selah also wants to make the most of her moments aboveground, to feel the difference that life gives, not lead a dead existence.  In her zest for life, Selah believes “It’s not what you look like, it’s how you see” (203) and that someone who doesn’t read, only ever sees through his or her own eyes.

In London, much to her surprise, Selah falls in love with her bodyguard—not her intended suitor.  Bear veers from Selah’s scheduled outings to show her the England she had dreamed of, “the country of the stories [she] loved.  Not planned shop visits or wardrobe choices but grass and stone and beauty enough to leave [her] breathless” (146).  But when Bear Green breaks her heart with an elaborate deception, Selah loses some of her trust in people, leaving her to wonder whether her next leap of faith will produce similar results.

At the Beholder’s next port, Norge, Selah encounters a family of disciplined and competitive youth who train endlessly in war games to channel their energy and to hone their skills.  The group knows one another so well, they almost speak a secret language.  A glance and a nearly imperceptible gesture can communicate a volume of meaning.  Gradually, Selah finds a place in this rough and tumble world and falls in love with yet another young man: Princs Torden of Asgard.

In this young adult debut, Bright writes an intriguing tale with bits and pieces of fairy tales, epic poems, myths, and legends.  As she divides the book into sections, she uses snippets of these stories—told in both English and in the language of their original telling—to foreshadow the events in that section.  These allusions, as well as references to famous storytellers like Grimm, Perrault, Homer, and Andersen, add a richness to the plot of The Beholder.

The Beholder is also an imaginative account of the history of colonization and colonizers.  Under the influence of usurpation, victims of treachery and stolen land are no longer free.  As this first installment in Bright’s planned duology comes to a close, Selah is determined to fight against the unfairness of these actions and to give voice to those stripped of their names and their stories.