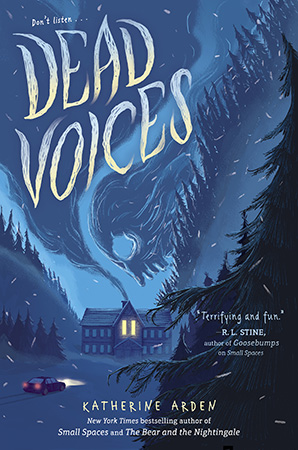 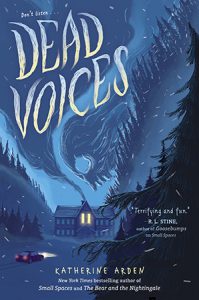 In Small Spaces, the prequel to Katherine Arden’s newest book Dead Voices, Coco Zintner, Olivia Adler, and Brian Battersby were alone, lost, and running from Seth, also known as the smiling man, and from living scarecrows who hunted in a dark corn maze and who tried to drag them off and turn them into scarecrows, too,

Good at playing chess and making plans, Coco is a careful and nervous girl.    Ollie, Coco’s best friend who lost her mother in an airplane accident, excels at math and wishes to be as fierce, reckless and brilliant as her mother the math professor and adventurer had been—“always laughing, always running, always flying” (125).  Brian is the star of the middle school hockey team.  Born in Jamaica, he loves books and scoring goals, but his real super power is noticing what goes on around him.

After their odd October adventure of being kidnapped into another world, a world behind the mist, the trio formed a lasting bond, but none of them like being alone in the dark.  Now it’s December, and the three sixth graders are snowed in at Hemlock Ski Lodge in Evansburg, Vermont, with four adults, but they are still afraid—nerves strung as tight as the line of the storm-cloaked ski lifts outside.  Ollie, Brian, and Coco had come out of the world behind the mist, a world where they narrowly escaped with the help of Ollie’s mother’s watch, only wanting to forget about that experience—to go back to school, be normal kids, ride their bikes, do their homework, and makes scones.  Instead, they are trapped in the maze of the ski lodge, trying to help Gretel, one of the Sacred Heart orphans find her bones.

All three agree that Hemlock Lodge is creepy.  Not only because the taxidermy exhibits keep moving and things like the generators stop functioning despite their being nothing noticeably wrong with them but because the storm outside keeps creeping in through the cracks, carrying ghostly voices with the wind.  When Don Voland, a ghost hunter and journalist who writes about ghosts, hauntings, odd occurrences, and other things that cannot be explained, shows up unexpectedly, his presence adds to the spooky atmosphere.

However, when Mr. Voland claims to know how to talk to ghosts, Ollie, who is eager to learn so that she can converse with her dead mother, agrees to Mr. Voland’s ghost hunting expedition.  “Most ghosts,” Voland explains, “they just sort of exist.  They’re not people.  More like the memory of a person.  A piece of the past, stuck in the present.  But sometimes—occasionally—they are more.  Those ghosts don’t just exist, they act.  They want something.  That’s when they’re dangerous, when they want something” (84-85).  After all, ghosts likes to inspire fear; fear means acknowledgement of their existence.

Mother Hemlock, the mistress of Sacred Heart Orphanage, wants to search out naughty children.  Since Gretel has run away and is in hiding, Mother Hemlock is on the prowl.  Both Ollie and Coco have nightmares in which they see glimpses of conditions at the old Sacred Heart Orphanage and in which they receive messages from whispers to stay out of closets and to avoid looking into mirrors.  Those cautions don’t deter the trio, however, who are soon in the thick of the mysteries of Hemlock Lodge.

They communicate with Ollie’s mom through Mr. Voland’s Ouija board and receive more warnings to beware, but of what they need to be wary and aware, the children are unsure—until Ollie loses her mother’s watch to Mr. Voland and finds herself on the other side of the mirror playing a game of wits against Mr. Voland who threatens to have them all behind the mirror by dawn unless they outsmart him and win his nasty game.

From the experiences shared in Dead Voices, readers will learn that a face is just another kind of deception; that tackling some problems isn’t the same as playing a hockey game where speed, strength, and bravery usually produce a win; and that risky behavior can be training for courage.  Because fear means a person is thinking of the future and of what might happen, doing something risky implies a person can’t think of the future but only of the present.  “And if you think of now, then you won’t be scared” (138).  We also learn the power of a feint, an aggressive move to draw an opponent’s attention.  “The thing about a feint is it’s just a trick.  A ploy.  A way to mask a much more subtle, simple, and straightforward attack somewhere else” (227).

Readers of R.L. Stine’s Goosebumps series and similar ghost stories will likely find pleasure in the spine-tingling thrills of Dead Voices when a winter ski vacation takes a terrifying turn.