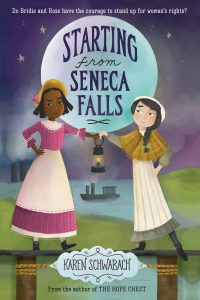 Set in 1848, Starting from Seneca Falls by Karen Schwabach joins a multitude of other information-rich, historical fiction books written for young readers.  Schwabach’s novel features eleven-year-old Brigid Gallagher (aka Bridie) who was born in Ireland but orphaned when her last living relative—her mother—is left destitute by a husband who drinks too much.  That is after her father and her brothers die on the coffin ships navigating to America during the potato famine in Ireland.

Because Bridie asks question, points out the problems with things, speaks when not spoken to, and has opinions about the way things ought to be, she is considered trouble.  She also yearns to be a printer someday, an occupation designated for males.

Another protagonist unwilling to settle for the status quo, Rose Wilson wishes to be a scientist like Elizabeth Blackwell, the first woman in America to earn a medical degree. A helper on the Underground Railroad, Rose is intelligent, ambitious, and kind. She insists on her right to an education and to learn math. From her and the African American community, Bridie learns that there is a kindness in the world, even in places where it hardly dares to show its head.

Besides featuring independent female characters, Schwabach’s novel shares important history for young readers, information about poorhouses and how they were located far from any bustling town, isolated because they housed people nobody wanted to have to see—marginalized people. “Not just poor people, but folks who had turned out simpleminded, or been injured badly at work, or had just gotten too old to work, or had become a pit peculiar” (2).

Other history lessons come in the form of famous figures: Lucretia Mott, Elizabeth Cady Stanton, and Frederick Douglass, to name a few.  All of these figures are involved in the abolitionist movement and the first-ever Women’s Rights Convention when 68 women and 32 men signed the Declaration of Sentiments.

Readers also travel down the Erie Canal with Rose and Bridie, whom Rose has given her mother’s name, Phoebe, so that she can hide from the unkind and abusive Kigley family.  Ironically, this time, the two are rescuing the Kigley’s daughter, Lavinia, and they travel through early cities, like Rochester, the great Flour City since wheat was a major crop in New York in 1848. As they travel, the trio learns about the California Gold Rush when the story about gold travels through time and space to York State, “riding on a piece of paper. That was what print could do” (192).

Due for release in June 2020, Schwabach’s book will arrive just in time for the celebration of the hundredth anniversary of the Nineteenth Amendment!