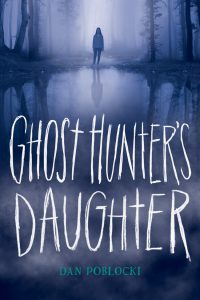 Like nightmares, scary stories are a sort of dress rehearsal for real-life fear, helping children learn to cope with the emotion in a low-stakes setting.  After all, the world can be a scary place where children will encounter frightful situations—such as getting lost, losing friends, being less loved than a sibling, or experiencing abandonment as a result of parental death or divorce.  Therefore, knowing how to confront fear can benefit children and help them cope with difficulty. Scary stories like Dan Poblocki’s Ghost Hunter’s Daughter, targeted for middle grade readers in the eight to twelve year old age group, not only help children forge resilience but give them a sense of control over fear.

In Poblocki’s book, Claire Holiday, Lucas Kent, and Dolly Snedecker confront fear and survive the encounter, modelling for young readers that fear is a surmountable emotion.

As the plot unfolds, readers meet Claire’s father, Miles Holiday, who is a ghost hunter.  He hosts a popular television show, Invisible Intelligence, which documents ghosts and the supernatural. So, by default, Claire is famous too.  However, she resists the unwanted attention from fawning friends and imagines herself as her own person, not just someone’s daughter.  Claire is a bright girl whose socks often do not match but who is a “voracious fan of science fiction paperbacks as well as a user of words like voracious” (7).

Along with Lucas Kent, Claire attends Archer’s Mills Middle School.  Lucas has come to live with his grandmother, Gramma Irene, while his parents work out of town. A psychic boy whose grandmother speaks to the dead, Lucas has an unsettling look.  His gift is answering the knocks he hears in order to help people, so when Claire’s deceased mother comes knocking, Lucas feels obligated to deliver the message Penelope carries: “I’m sorry, Claire, but wherever your father’s at, he’s in real trouble.  The kind of trouble someone doesn’t come back from” (29).

That announcement sets in motion a rescue plan around which the mystery of the novel revolves.  It takes the duo to Hush Falls Holler, where they meet Dolly, whose deceased mother was obsessed with the idea of a graveyard watch.

Knowing her way around town, Dolly explains that Hush Falls Hollow is haunted by the ghost of Lemuel Hush.  Hush remains vengeful and angry about the state’s building a dam to create a reservoir to provide water to other communities.  That state “advancement” drowns an entire town and essentially robs several families of their property.  Because the town is now underwater, Hush is trapped, unable to move on to the afterlife since he is perpetually stuck with the job of graveyard watch. The three must not only resolve the mystery of Miles’ whereabouts but calm the ghost and set free the spirits of those lured to their deaths by Lemuel Hush.

In his ghost story, Poblocki divides the telling into three parts: The Knocking, The Holler, and The Silence.  It not only memorializes towns that have succumbed to drowning in the name of progress but models heroism in the young and depicts how a young person might cope when overwhelmingly sad feelings arrive.

Additionally, readers will likely appreciate the definition of dreams as “our brains trying to process our lives, our fears, our disappointments, [and] our joys” (264).