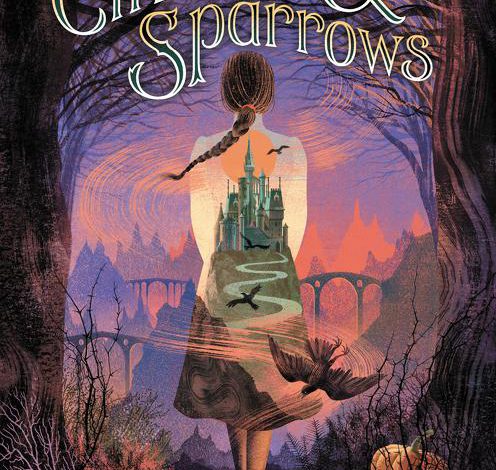 With Cinders & Sparrows, Stefan Bachmann has written a gothic novel for middle grade readers. Given the genre, his book incorporates ghosts, spirits, hauntings, misty woods, gloomy environs, enchanted chambers and staircases, talking trees and a marble bust who claims to be a prince.

The novel’s plot revolves around twelve-year-old Zita Brydgeborn and her discovery that she is not an orphan after all but a member of the Brydgeborn family of witches and the heiress to Blackbird Castle.

With Mrs. Cantanker as her teacher, Zita receives all sorts of training—some of it oddly questionable. Still, according to Mrs. Cantanker, “A true Blackbird is graced with cunning, sly wits, a sharp tongue, and the power to repel the evils of night and fog. But! In return, they bear a great burden and are feared by both the living and the dead” (49-50).

Feeling strangely honored and not wanting to “fade away, peaceful as you like, an old woman who’d never caused any trouble, never witnessed anything too dreadful, and never done anything too terrible or too good” (65), Zita accepts her new lot in life. She needs to reverse the ephinadym mulsion spell that has trapped her family in a death-like state, uncover the meaning of the League of the Blue Spider, and ensure that the evil Madgeboor is not allowed back into the world.

But things are not as they seem—not only with the house but with the servants, who seem to be victims of a spell that prevents them from telling the whole truth. And the intentions of Mrs. Cantanker—who is quite cantankerous indeed—grow increasingly suspicious.

As Mrs. Cantanker shepherds her through the hallowed traditions of witchery, Zita learns to banish ghosts, change the natural course of the weather, and fight fangores. Along the way, she encounters some peculiar people, like Gartlut. Despite his despicable nature, he does share valuable wisdom: “There [are] no fine airs or good graces locked up in those lovely bank accounts you inherited, were there? One never inherits the things one truly needs. One must find those all by one’s self” (244).

Left with little but her own wits, Zita relies on her spirit animal Vikers the crow and the help of various ghosts to guide her on her quest. Wishing to be more certain about what she should do and desperate that her efforts won’t be sufficient to fix what has gone rotten in the world—“it’s too big and too difficult and no one is who they say they are” (281), Zita’s mother tells her that she must not give in or give up. “Daughter, even if you cannot see the truth of things, even if you are frightened and discouraged, know this: some things just are. You don’t have to be sure of them. They don’t ask your opinion. . . . You grew up to be a brave, extraordinary girl, despite being kidnapped by the Butcher King, despite living almost your entire life on your own” (282).

Zita must persist, armed with her strength and ambition, hoping to prove that one can be still be kind while exercising power.

2020-11-06
Previous Post: The Bridge by Bill Konigsberg
Next Post: Out of Hiding: A Holocaust’s Survivor’s Journey to America by Ruth Gruener