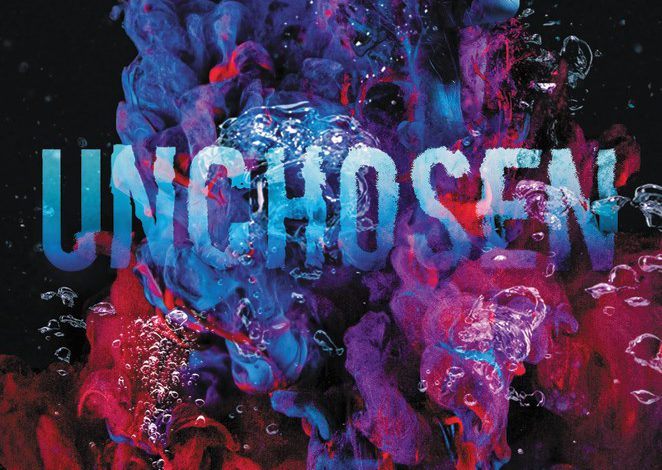 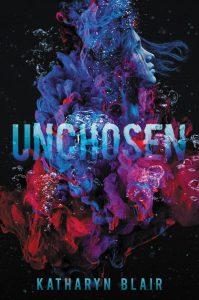 In Blair’s dystopia, someone has knowingly or inadvertently unleashed the Crimson, a virus-like curse that causes the end of the world as we know it. Rather than wearing face masks, people wear blindfolds because looking into the wrong eyes is a death sentence. When infected, a person’s irises turn from their natural color to purple and then to red. That individual has only one day to change his/her fate by passing the Crimson on to three people—called Curseclean—who have never before been exposed to the Crimson. Once that exposure has happened, the irises of the infected turn yellow, making a Xanthous—a person immune to the Crimson forever. If this transfer doesn’t happen, the virus takes over its host, transforming the person into a Vessel. These immortal hunters with lethal red eyes not only have a heightened sense of smell but are extremely strong and freakishly agile flesh eaters with an insatiable hunger. A Vessel can only be killed by beheading it with an iron blade.

To protect themselves, people seek out Runners, “traffickers who capture and sell Curseclean to those who can pay to save their own lives and become Xanthous. The Runners spread the curse, then lock the Exposed in a cell and wait for the Crimson to take over” (51).

Prior to the virus’ taking over everyone’s lives, the Holloway sisters are blissfully immersed in their teenage lives as students at Santa Monica High School. The eldest, Harlow is a guitarist, who plays with a fierce intensity and sings in a voice of “liquid metal.” Charlotte, the middle sister, is a journal keeper and a Mario Kart player with faith in people’s basic goodness, and Vanessa is a tenacious gymnast with a fire that makes her one of the best in the state. In Charlotte’s words, “We lived in a world that predicted out doom at least twice a week.  We had shows about it; people stood on street corners, screeching about the end. We were so ready for the fall of mankind. But, when it actually came—we didn’t see it coming” (9).

In a prophesy, only the Chosen One can end the Crimson by finding Anne de Graaf’s heart.  In an act of female independence, defiance, and strength, Anne upended the world. When she was captured, rather than return to a cage as a kept woman, she grew angry—“saw red”—and jumped overboard, cursing the sea and giving birth to a legend. Treasure hunters, historians, and scientists, however, find evidence of the story’s truth.

Further evidence shows up in the Holloway house when the virus sweeps the school. In their attempt to escape, Vanessa drowns and is brought back to life—reborn, just like the legend predicts. As the Chosen One, Vanessa now sleep walks and sleep talks in cryptic messages. Charlotte records these, thinking she might be able to decode them or find patterns that lead her and her sisters to Anne’s heart so that they can save the world while keeping Vanessa’s identity secret.

But there’s more going on than Charlotte is allowed to know, as several greedy and unscrupulous politicians and bureaucrats—even a genocidal maniac or two—are seeking control. During a raid, just as Katniss Everdeen steps in to take her sister’s place in the Hunger Games, a novel of the same name by Suzanne Collins, Charlotte claims to be the Chosen One to protect her younger sister and to buy Dean, her sister’s boyfriend—but the boy she loves—some time to escape. Charlotte is captured, rescued, and recaptured several times, as she spends the remainder of the novel pursued by Vessels and Runners and people with money or hungry for power. A lie meant to save her sister and the boy she loves may instead bring death. In other complications, no one is who they say or seem.

While her characters unravel a conspiracy behind the virus’s spread, Blair uses a dystopian framework to amplify issues of sexism, classism, and racism, as well as to explore the tension between moral responsibility and survival. The Crimson lays bare many of the flaws in current social structures, where the rich and powerful are able to escape the worst consequences of the virus at the expense of the vulnerable.

Amid all of the control-grabbing and greed, Blair highlights the power of hope, calling it a wild spark worth something, and the power of kindness, connecting it to the core of humanity.  When Charlotte resists someone’s being nice to her, reading that behavior to mean that she’s too weak to handle things on her own, Malcom tells her: “Kindness is the only thing that shows that we’re worth the survival we’re fighting for. You should accept it as the precious and rare thing that it is. We can’t save humanity if we lose ours” (85).

Blair’s novel further emphasizes the role an individual plays in change, essentially promoting the “if it is to be, it is up to me” philosophy. She suggests that we follow our hearts and live the life we choose, the one we’re passionate about.  After all, the world will always have people who care and people who don’t; people who want to be the best versions of themselves, and people who could care less; people who contribute to society and people who don’t—maybe that’s our curse.

2020-12-31
Previous Post: Here the Whole Time by Vitor Martin
Next Post: Land of the Cranes by Aida Salazar