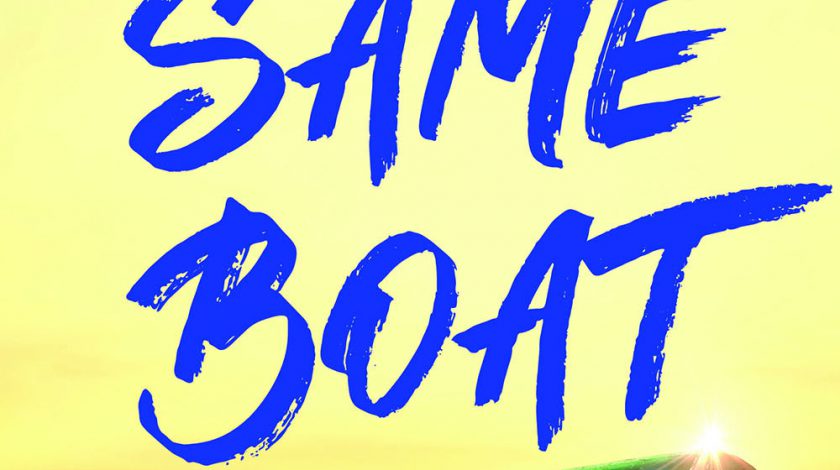 In the Same Boat by Holly Green 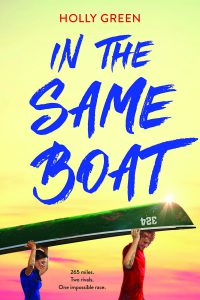 Haunted by the spot on the wall where her finisher patch should go, seventeen-year-old Sadie Scofield is determined to finish the Texas River Odyssey after giving up and then getting injured when she partnered with her dad. Because Scofields never quit, Sadie is living in a shadow of regret as she clings to the “can’t keep up” memory and allows it to erode the relationship with her father.

Anyone belonging to the discourse community of river rats or competitive boaters/racers will likely be on the same wave length as those in Holly Green’s young adult novel, In the Same Boat. Talking of sweepers, log jams, strainers, eddy lines, and gunnels, the characters’ colloquialisms make them sound like they’re talking in code.

Two hundred and sixty five miles of water and obstacles, the Odyssey (patterned after the Texas Water Safari) is about “digging down and pushing yourself further than you ever dreamed” (55). It’s about “seeing what you’re made of. What you’re willing to do to succeed. And what, if anything, can make you quit” (203). It’s when ounces turn into pounds and pounds turn into pain. The race is over for anyone who takes help or gives it to another racer.

Both Sadie and John Cullen Hink (Cully) have something to prove, so when Sadie’s brother ditches her to join another boat, stranding Sadie, Cully agrees to be her partner—even though the Hinks and the Scofields have a long-standing feud after having been friends for years.

The feud started over a race—Johnny and Will’s hate hung between them.  In that moment eight years ago, with their dads at war, Sadie knew it was all over between her and Cully, too. That there would be no more sneaking over to read books together after lights-out; no more splashing in the river; and no more tree house moments making memories.

During childhood things were good and comfortable and warm between Sadie and Cully. They were best friends until the feud between their fathers tore them apart. Now, in the boat, Sadie has a lot of time alone with her thoughts.  Drenched in sadness and regret and longing for a truce, the two chip away at one another’s armor.

With Gonzo’s lecture, Sadie realizes she needs to learn that she and her life are worth more than a canoe race, and Cully needs to learn that his father is stealing his power to choose with manipulative tactics.  From Gonzo, the pair also learns to take a helpless feeling and turn it into good.

Green shares other morals as well—how we need to accept the pain we feel in a given moment rather than worrying about the pain ahead. This helps make discomfort more manageable. Another key lesson comes from reevaluating defeat. Sadie comes to accept that even if she can’t beat someone in the river race, she can beat them at something more important. Sadie doesn’t want to make the same mistake as Cully’s dad, who never loved his son properly; but whether she gets to love him as a friend, as a distant memory, or as something more will be the readers’ discovery.

Despite the romantic thread, the grit thread is stronger. Even as children, Cully and Sadie had a way to throw down the gauntlet. To say the word goulash was to ask: Are you tough enough for this? Ultimately, Green’s theme is about mental toughness and pushing ourselves past pain and doubt to prove something. But the person to whom we need to prove something might just be ourselves. Although the lessons they need to learn may differ, Cully and Sadie are ultimately in the same boat–both literally and figuratively.