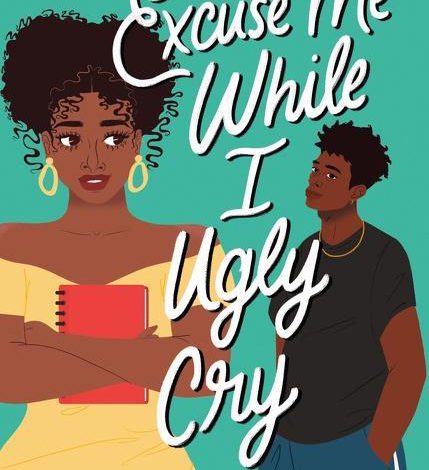 Excuse Me While I Ugly Cry by Joya Goffney 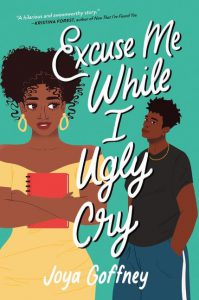 Because of her parents’ arguing at home, racist comments and insensitivity from classmates at school, stress induced anxiety, and the typical horrors of high school, Quinn Jackson keeps a journal filled with lists.  A coping mechanism of sorts, her lists serve to calm her mind, provide a sense of focus, and give her a foundation.  She also lists her goals and dreams, her fears and worries.  Her journal contains her feelings when she doesn’t know how to express them out loud.

When her journal turns up missing and she instead has a red-covered spiral that belongs to Carter Bennett, Quinn determines that Carter must have her journal.  Having picked it up accidentally while the pair was working on a collaborative class assignment, Carter confirms Quinn’s suspicion and agrees to make the trade the following morning, claiming he didn’t read past the first page. Somewhere in between Carter loses the journal and now someone is blackmailing Quinn with her secret thoughts.

A debut novel set in Texas, Excuse Me While I Ugly Cry by Joya Goffney explores themes relating to family, friendship, trust, relationships, and self-acceptance. Although Quinn is central to the plot, she is joined by other well-defined characters in Carter, a Black youth who comforts Quinn with his voice, his words, and his presence; Olivia Thomas, a mixed race girl who makes Quinn feel whole; and Auden Reynolds, a White youth and classmate who falls for Olivia. Quinn’s two best friends, Destany and Matt, also play significant roles.

As the blackmailer plays Quinn like a puppet, Quinn tries to run from her problems—she has lied to her parents about being accepted to Columbia, she is afraid to visit her Grandma Hattie who has Alzheimer’s, and she’s confused about her relationship with Matt her best friend about whom she has had sexual fantasies. She also doesn’t know who is exploiting her and for what purpose.

Because Carter feels obligated to help Quinn find her lost journal, he attempts to share his insight and to ease her discomfort: “You said your journal is like your foundation, that it tells you who you are. Would it be so bad to make a new foundation? To redefine yourself?” (91).

After hearing Carter suggest that it’s a little hard to change who she is when she has a journal telling her who to be, Quinn wonders if it might be somewhat toxic to write in stone who she is and who she should be.

Quinn also realizes that despite her fears that Hattie will not know her, she misses Hattie something terribly—her voice, her singing, her rides in the Gator, the swimming hole on Hattie’s property. Hattie, who is “too big for indoors,” has always told Quinn, “If I can still move, what I’m gon’ be still for?” (48). Now, she’s in a rest home and Quinn is too scared to move on, to change, to live large, or to be seen. Believing that she doesn’t have Hattie’s courage, Quinn goes through life somewhat passively, not realizing that having Black friends will help her feel more whole.

From Hattie, despite her advanced dementia, Quinn learns the importance of making new memories, revisiting old ones, and savoring time that remains rather than wasting it due to fear. She also realizes that perhaps the only thing that matters is that she remember her name, who she loves, and what she loves about life.

On her breakthrough journey, Quinn further determines that making lists of all her fears with no intention of doing anything about them has kept her from ever facing them. Quinn makes other key discoveries about love and about who she is—someone too big to be contained by lists, someone with the courage to admit that she got rejected from Columbian, is terrible at English but good at writing humorous captions, and can stand up for herself. Tired of letting pain take the wheel, she decides “it’s time to let love drive” (344).

2021-09-12
Previous Post: The Right Side of Reckless by Whitney D. Grandison
Next Post: Jay’s Gay Agenda by Jason June