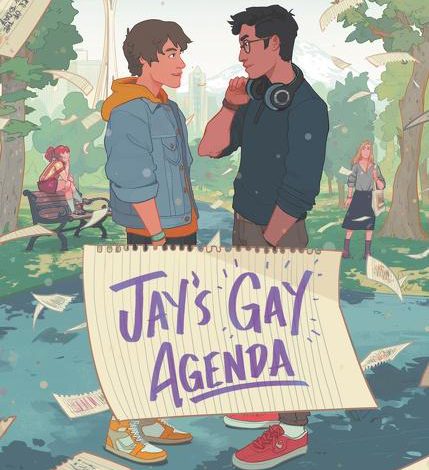 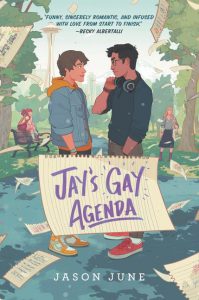 Set in Riverton, Washington, Jay’s Gay Agenda by Jason June follows the life of Jay Collier, a young man who feels alone in his difference. A hyper-organized list maker, Jay is a statistics geek, mathematician, and reality tv aficionado who can recite the MTV, VH1, and Bravo show schedules. He is also an award-winning hoedown costumier and a self-proclaimed “inexperienced and getting-desperate gay virgin” (60).

Jay’s life grows more complicated when his ride-or-die best friend, Lu Fuhrman, goes into “Heterosexual Hookup Mode.” While Lu experiences various milestones with her boyfriend, Chip, Jay feels abandoned and like he’s living in quarantine. Then, his mom is promoted to district manager in the grocery store business and is transferred to Seattle.

After eighteen years living in an LGBTQuarantine, Jay believes that moving to Seattle—where sexual diversity is more prevalent—will give him an opportunity to have milestones of his own as he completes the items listed on Jay’s Gay Agenda. Here, he meets Max Knudson, whose body is male and his energy feminine. He pays tribute to the pronouns he/him as well as she/her, and his favorite expletive is Lord and Taylor.  Max agrees to be Jay’s guide in the gay community. Jay also runs into—both literally and figuratively—Albert Huang, a very sexy boy. Jay soon discovers that everyone else also has an agenda and that a bigger city isn’t necessarily a more aware place.

Although I have never been a teenage-boy, I was taken aback by the superfluous talk of penises, thrusting hips, and losing one’s virginity. Still, the reader will learn, along with Jay, that his gay agenda should not have been so focused on fulfilling personal milestones but on maintaining an honest and healthy relationship with his friends and family members. Jay’s nakedy-time fun puts him in a series of predicaments where he is telling half-truths, dodging his emotions, and avoiding any real connections.

In addition to the character’s enlightenment, the reader will gain some truths about sexuality as a social construct. June’s description of the drag community makes some valid points: “It’s also about bending the arbitrary rules society puts on gender and showing how it’s all just an act” (256).

June’s novel loudly declares not only that people need to be who they are, embracing their individual identities, but also that being gay isn’t the only part of the self that matters.  In the process, June debunks some gay myths and educates readers about stereotypes—pointing out how they can affect a person’s body. Stereotypes can also “dehumanize someone so much that they make choices that feel completely wrong just to prove they are human” (268).

By the novel’s conclusion, other morals surface, like this one from Jay’s dad: “We all make mistakes as we develop into the person we’re meant to be. It’s how you make up for those mistakes that matters” (305). Another comes from Jay’s own insight about friendships: “They were way less complicated than when romance and feelings and hormones and horniness became a part of everything” (305-306). A third derives from Lu, who tells Jay, “I’m not a helpless female. I don’t need you to feel sorry for me. I just need you to be there by my side when things get tough” (343).

All readers will likely appreciate this final truth: “Sometimes the best solution for a tough situation is just to name it, to say how much things suck or are weird or difficult, and to figure out how to move forward together. Even if that means the suckiness and weirdness and difficulty won’t change” (343).

2021-09-20
Previous Post: Excuse Me While I Ugly Cry by Joya Goffney
Next Post: Ophie’s Ghosts by Justina Ireland