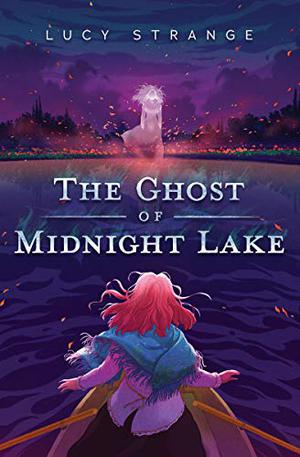 The Ghost of Midnight Lake by Lucy Strange

Just in time for Halloween 2021, Lucy Strange’s new middle grade novel, The Ghost of Midnight Lake, tells the story of twelve-year-old Agatha Rose Walters who thought she was an Asquith. The mystery of Agatha’s parentage, the presence of a Ghost Girl, and the lost Queen’s Stone—a legendary white opal—add intrigue to Strange’s story. 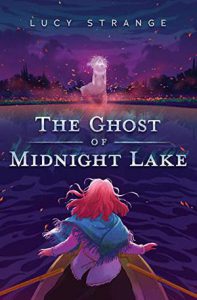 e District in 1899, Lady Agatha loses her father. With his death, everything changes at once. Her cousin Clarence, the new Earl of Gosswater evicts her from the only home she has ever known and tells her that she is a nobody since her father is really Thomas Walters. With anger, grief, fear, and confusion swirling around her, Agatha steals the King Stone, a black opal that Clarence thought would affirm his noble status.

Now, living in a farmer’s cottage with the simple but mysterious Thomas Walters, Agatha realizes that she and her supposed father are very different creatures from very different worlds. Gentle with his pony, George, and the geese on his farm, Thomas is gruffer around Agatha and gives her cooking and cleaning chores. With only the knowledge of the luxuries of Gosswater Hall, Agatha has never before been served breakfast by someone who isn’t a servant. Nor has she had to notice when the stairs became muddy or the dishes dirty. Feeling untethered, Agatha has to accept that she is just plain Aggie whose family has kept geese for generations at Gosswater. One of the geese, Susan has a special bond with Thomas. She comes to play a key role in the story.

When Aggie meets Bryn Black, she decides that she’s the sort of girl to go ghost-hunting with her friend. On New Year’s Eve, Bryn and Aggie row to Skelter Island and sit in the cemetery. At one of the silvery tombs, Agatha hears a voice, smells roses, and sees a mysterious light. As they leave the island, Aggie encounters a “glimmering mist, the shimmer of starlight on the lake—opal-white. . . . It is a girl—the shape of a girl” (112). Aggie is unsure whether this siting is real or a figment of her imagination set to work because of Sexton Black’s proclamation that the Asquith’s have never been ones for resting peacefully: “Too many dark secrets. Too much unfinished business” (70-71).

A morbid and abusive alcoholic, Sexton Black adopted Bryn from the local orphanage. A gravedigger, he predicted that the turn of the century would allow a ghost to creep through the crack in time—“the crack between night an’ day, between one year and t’ next, between centuries.  Nasty things seep an’ creep through . . .” (71).

As Aggie puts together various pieces to her puzzled life, she feels unbearable wrongness at multiple turns: “It is wrong that everything has been taken from me. It is wrong that I am entitled to nothing—not even to know who I am, who my mother is” (170). When her father travels to Penrith, a neighboring village, to perform some carpentry work, Aggie huddles with the geese one night. Their warmth and softness surround Aggie, making her feel safe. In that moment, she realizes “they can be soft and they can be fierce, just like me” (171).

Aggie’s fierce nature emerges in her desire to seek revenge on Cousin Clarence. She wants Clarence to suffer as she is suffering. Convinced that she has to do something with all the anger, fear, and hate that has built up inside her, Aggie concocts a plan to execute the ultimate act of justice and vengeance. In the process, she learn that the past can reveal her origin story but it can’t tell her who she is. As Bryn says, “Who you are is up to you right now” (223).

With expert pacing and allusions to Shakespeare’s Hamlet, Strange concocts a thrilling story with ghosts and vengeance, truth and uncertainly at its heart.

2021-11-09
Previous Post: Yusuf Azeem Is Not a Hero by Saadia Faruqi
Next Post: Battle Dragons: City of Thieves by Alex London