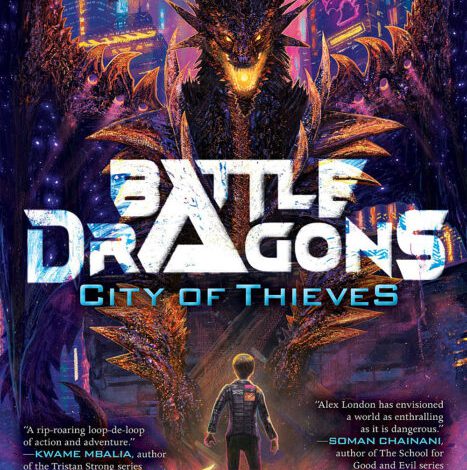 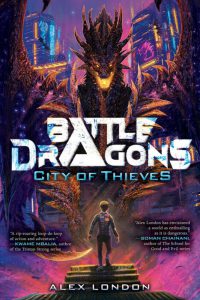 Reckless, easily distracted, and afraid of heights, Abel loves comics, games, books, and dragons. As a collector of DrakoTek cards, he and his best friend Roa enact dragon battles using the cards. The two seventh graders live in Drakopolis, a world where dragons serve as pets, vehicles, and in gang battles. Lessons in school include dragon biology, dragon lore, and exercises with Educational Resource Dragons that provide problem-solving practice using the acronym OODA: Observe, Orient, Decide, and Act. Even though Abel failed his Dragon Rider Academy Entrance Exam, he still dreams of being a dragon rider like his brother Silas—a cadet at the Academy and a rising star in law enforcement.

One night while playing with his DrakoTek cards, Abel spots his sister leaping fearlessly from rooftop to rooftop, risking imminent peril. A well-known dragon thief, Lina is a revolutionary who believes that the City Council doesn’t serve the people but serves the powerful. Because she wants to change that injustice, she joins the Sky Knights who steal for the good of the community. From her and from his teacher Ally, Abel encounters the notion of kindness as having a price. Abel doesn’t want to get used to that kind of kindness. In his mind, real kindness isn’t a trade but something given as a gift. He doesn’t like the kinner version of kindness at all. Nor does he favor the notion of stealing as potentially just. His sister asks, “But which is more wrong—stealing a dragon from the powerful to help feed people, or letting those people starve” (200)? Expecting people to fight in return for freedom and justice feels like a form of blackmail to Abel who believes that help which comes with conditions isn’t kindness; it’s just another trade.

In Drakopolis, spray-painted gang symbols form an unofficial map of the city’s neighborhoods. The Big Three gangs are the Red Talons—known for being greedy and power hungry; the Sky Knights—famous for their discipline and loyalty, not for seeking territory, money, or power; and the Thunder Wings—notorious for their knowledge of science and invention. Every neighborhood has its powerful kin—gangsters that commit crimes and take money from honest people in exchange for protection from the other kins. “But the cool thing all kins did was battle their dragons in epic street rumbles, which were the stuff of legends. Abel loved movies and comics about the kinners, even if they scared him in real life” (10).

Gender nonbinary, Roa is a certified genius who refuses to be a bystander in life. Outspoken and confident, he attends after-school veterinary classes at the community college three days a week and has a skill with healing dragons. Whenever they or Abel feel afraid or alone, they ask: What would Dr. Drago do (WWD3). WWD3 becomes a code they use whenever one of them is feeling nervous. Abel and Roa figure that if they aren’t feeling brave, it’s better to borrow bravery from one of their heroes than to run and hide.

Soon, Roa and Abel find themselves in the midst of “grownup” confusion. Abel wonders whether growing up means realizing everyone you love hides pieces of themselves from one another. He, in turn, begins to hide pieces of himself and learns to be deceptive and strategic. He also learns that some measure of peace can be derived from being useful and having a purpose.

Motivated to protect his family, Abel finds himself caught up in a race, a heist, and a dragon duel that requires speed, smarts, and power. In the process, he accepts that people are complicated and full of secrets and surprises that are scary but also somewhat exciting. As he begins to hoard secrets and to grow complicated himself, Abel realizes that people can be more than one thing; that identity is not so simple or singular as thief, liar, or bully. He also understands that power is complicated and that choice matters. He clings to the idea that Shivonne—a casino hostess—shares with him: “The city will teach you hard lessons. Don’t let them make less of you” (152).

Such is the plot of Battle Dragons: City of Thieves by Alex London. This is Book One in the Battle Dragon Series, and London leaves enough unfinished business in this installment to entice readers to read the next. Readers of the Harry Potter series will likely enjoy these books. Just as Harry Potter fans found affiliation with the various houses: Gryffindor, Hufflepuff, Ravenclaw, and Slytherin; readers of Battle Dragons will need to decide which kin they’re in: Red Talons, Thunder Wings, Sky Knights, or Wind Breakers.  Each Kin has its own values, codes, and plans for their city. Readers can even take a quiz to find their kin.

2021-11-14
Previous Post: The Ghost of Midnight Lake by Lucy Strange
Next Post: We Can Be Heroes by Kyrie McCauley