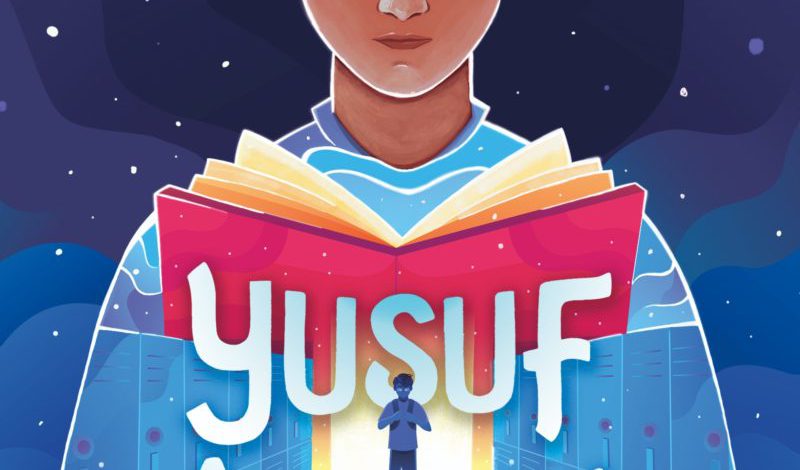 Yusuf Azeem Is Not a Hero by Saadia Faruqi 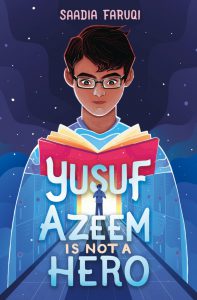 With the twentieth anniversary of 9/11 having recently been commemorated, we all might wonder whether we have progressed as a nation in the last two decades. We might ask ourselves if we treat others better today than we did in the days and months after the attacks.

Because today’s school age youth were not yet alive in 2001, they may wonder why September 11 carries the motto, Never Forget. They may wonder why history is so important.  Saadia Faruqi’s novel Yusuf Azeem Is Not a Hero will guide middle grade readers to understand these complicated questions with their layered answers. Readers will learn that history informs our present and affects our future if we care to be mindful of the lessons it offers.

Set in Texas with most of the action taking place at Frey Middle School, Faruqui’s novel features a group of young Muslims who are starting sixth grade and looking forward to cafeteria food, Chromebooks, robotics club, and lockers.

Danial Khan, Yusuf Azeem, and Kamran Abdullah all have their own coping mechanisms for surviving when Never Forget graffiti shows up on a building in town and serves as the catalyst that ignites bullying about terrorism.

Danial, with his pessimistic attitude, keeps his head down and finds solace in his faith and in his best friend, Yusuf.

A “robot golden child,” Yusuf is optimistic and dreams of building “robots that function like brilliant metallic geniuses” (18). He’s ready to compete in the Texas Robotics Competition. To still his mind and to distract it from disturbing thoughts, Yusuf writes code. He also finds comfort in reading his uncle’s journal from twenty years ago and writing his own entries.

Kamran, who changes his name to the Americanized version Cameron, wears an earring, dresses like a gangster, and adopts a tough-guy attitude. Known as a “bad seed” among many of his Muslim neighbors, Cameron carries an air about him that indicates he hates Muslims.

When Yusuf begins receiving notes in his locker—hate mail, actually—he chooses to ignore the harassment. But when Ethan Grant’s bullying behavior escalates, Yusuf refuses to stand by and do nothing. Tired of being scared and feeling foolish, he faces his enemy, hoping to stop the spread of bigotry and prejudice. Yusuf wonders what sort of world he lives in when airplane hijackers and murderers are called “my people” simply because they wear the same face and profess the same faith.

Soon, the entire community of Frey, Texas, has the Patriot Sons to deal with. Yusuf’s Amma tells him: “Suspicion of those unlike us is common human behavior. We don’t trust those we don’t know” (184).

Another important life lesson comes from Yusuf’s Abba, who tells him: “It is also important that the values we learn from childhood are actually visible to others. Being good and kind and generous are all important, and your friends should see those parts of you all the time” (207).

Because Faruqi’s novel addresses persecution, she pulls in a parallel thread with an allusion to the Holocaust. The school’s librarian, Mrs. Levy explains to Yusuf that people often give in to their ugly, scared feelings, mistreating people and staying silent when they should protest. “Never you mind what people call you, okay? Be proud of who you are. Because if you’re not proud of yourself, how can you expect others to see you that way?” (267).

Ultimately, the novel shares important lesson about getting to know one another since knowledge provides one antidote to hate.  This fact-finding is often rooted in conversation. “Maybe if we talk about it, we can get past it. Learn from it” (354), Yusuf says.

With such conversations, hopefully we can mitigate human cruelty and the tendency to hate, reject, or ignore what we don’t know or even try to understand.  Because some things are invisible until they happen to us, we may be blind to ignorance and hate as diseases until we are victims or until a story opens our eyes.  Once our eyes are open, it is difficult to close them again.

Twenty years after 9/11, we still have healing to do. For those of us who lived through that time or who have endured similar or more egregious traumas, the past still hurts. While we may never forget a wound that will never heal, we need to find a path forward.  Books like Faruqi’s can open the conversation and begin the process.

2021-11-03
Previous Post: The Problem with the Other Side by Kwame Ivery
Next Post: The Ghost of Midnight Lake by Lucy Strange