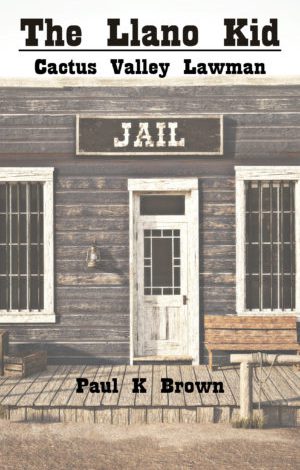 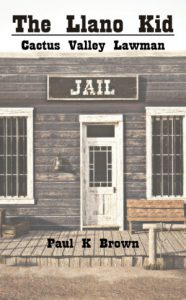 Inspired by Louis L’Amour and targeting fans of the western genre, Paul K. Brown writes The Llano Kid series in which he traces the journey of his title character.

In the third book of the series: Cactus Valley Lawman, readers learn the origin of the protagonist’s name, as well as additional pieces to the story of this young man who was orphaned as a boy. Now, Llano has taken on a job as security and scout for a wagon train heading west to California. When the wagon train is ambushed, Billy Nevil’s Ma is killed, leaving her son Billy an orphan at age twelve.

Seeing himself in Billy and feeling responsible for the boy’s future, this drifter from Cherokee Country decides to mentor Billy. The two settle in Cactus Valley, a small mining town in the northern vicinity of the Mojave Desert.  When Llano realizes the town has no marshal, he takes on the job, determined to transform this tough mining community into a civilized settlement.

How long a half-Cherokee/half-Irish young man can keep a lid on Cactus Valley is the main conflict in Brown’s novel. While the town has good people, it also has rawhide outlaws, miners, gamblers, and greedy businessmen looking for power. Because a drinking man doesn’t always use his best judgment and because gambling and mining are a tough combination, Llano imposes a law about hanging up one’s gun belt in the saloon. “Hard work, fast money, and sudden losses can bring out the poison in a man” (53). This and other changes to civilize the town make Llano’s job challenging.

In this 1870s setting, Llano teaches Billy about justice and fair play, as well as encouraging him to learn to read. When Billy asks about guns, figuring on getting a couple of his own, Llano tells him, “Boy, there’s no purpose to carryin’ around these here six-shooters, ‘less you know how to treat ‘em. . . . A man’s gotta keep his cool while others are out building a reputation. Don’t be settin’ store by no foolish gun-play” (23).

Although Llano wants Billy to know that guns have their use, he explains that there’s a lot more to a real man than branding himself as a fast-draw or a gun slinger. “Tends to attract some unwanted challenges from fellers lookin’ to carve them out a name on the range” (23).

He also teaches Billy to box and wrestle so that he can protect himself but explains the value of befriending a person whenever possible.

With this third book in the series, readers also learn that survival depends on cultural intelligence, paying attention, and using one’s resources and good sense to solve problems.