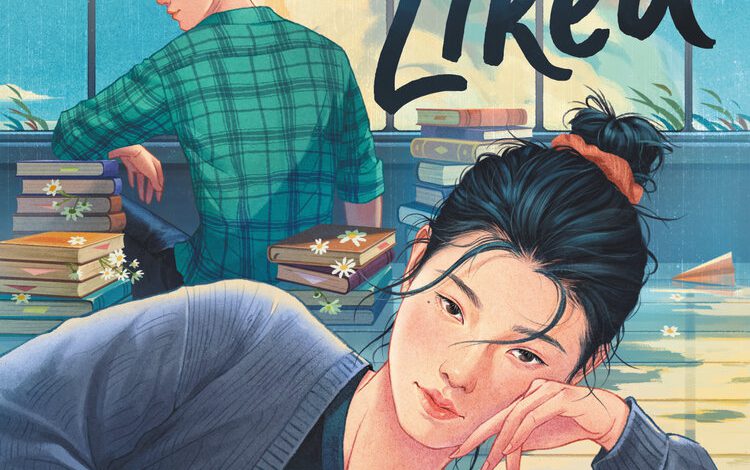 Not Here to Be Liked by Michelle Quach 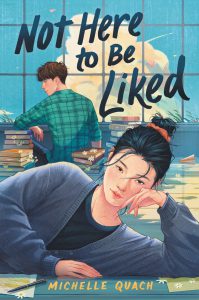 A junior at Willoughby High School, Eliza Quan is an ethnic Chinese girl who is smart although a bit prickly. A thinker who is passionate about facts and journalism, she doesn’t believe in self-aggrandizing or otherwise drawing attention to herself. In fact, she isn’t here to be liked. Similar to the attitude of her best friend Winona Wilson, Eliza doesn’t want to get noticed for the wrong reasons. However, Eliza does have one dream: to make it on the Wall of Editors.

At Willoughby, the editor in chief of the school newspaper, the Bugle, is chosen by popular vote, and given that she’s the most qualified and the only candidate, Eliza feels confident that she will fulfill her dream. That is until former baseball jock and resident recluse Len DiMartile throws his hat in the ring. When Len wins the staff’s selection for being less intense and more approachable, Eliza writes a manifesto in which she vents about the unfairness of the situation, blaming both the patriarchy and gender bias. Somehow, this private moment of venting in what she considered a safe space, the editing room for the Bugle, became public and Eliza’s manifesto gets posted to the school’s web page. Soon, Eliza is the target of everyone’s vitriol. In the process of fighting back and attempting to discover who posted her private thoughts, she sets in motion a chain of events that has everyone calling her a feminazi or worse.

After Eliza hijacks the morning announcements and proclaims she’s a feminist, the principal’s response is to make Eliza and Len work together, to reach across the divide of deeply entrenched differences and to connect. When the connection they form becomes more than just a working relationship, Eliza wonders what has happened to her. After all, one kiss has a way of complicating everything.

Such is the basic plot behind Michelle Quach’s novel Not Here to Be Liked. But the plot twists address some important social issues, not the least of which is how we use labels and where we draw lines. While labels—whether feminist, jock, male, female, or even slut—can contribute to cognitive efficiency, they also open themselves to bias. Readers will find themselves critically thinking about what it means to be a feminist. Is a feminist someone with “hopes, dreams, and wants that are completely independent of male needs and desires” (210)? Should a feminist not desire the affection of a man to make her complete?

In one of her grand gestures, Eliza the feminist questions whether Lady Justice is blind to the wrong things. Rather than wear a blindfold, she needs to see things as they are, making inequality visible.

And the lines we draw, often in the name of setting personal boundaries and making distinctions, don’t always protect us but work more in the service of division and judgment.

Another important question that Quach poses is whether performative gestures are the best way to fight inequality. Through her characters and the consequences they face, she encourages us to consider the value of actions coming from a place of civility and compromise as opposed to one of antagonism and alienation.

Upon completing this novel, readers will likely realize that life isn’t black and white but bigger than any constraint we can impose on it. According to one philosopher, the structural constraints we impose need to contain creative and meaningful deviation.

However, at its core, Quach’s book seems most to be about the human desire for acceptance and a search for belonging. Sometimes, we hesitate to put ourselves “out there” or to take certain risks because we fear judgment and possible rejection when we don’t measure up to someone else’s expectations or standards. Or, we might define ourselves as a star pitcher or the editor-in-chief only to discover that that identity has the potential to disappear.  At one point in the novel, Eliza tells Winona, “And yes, you might get rejected for unjust reasons, but the best thing you can do right this moment is shoot your shot” (348).

Sometimes this process involves pretending, another topic about which Quach invites personal evaluation. As we attempt to avoid hurt and hate in our search for acceptance and belonging, what does our pretending mean and what implications does this pretense have?

Ultimately, Not Here to Be Liked emerges as a type of user’s manual for life. And while it asks more questions than it answers—whether about baseball or beauty—it leaves the reader thinking. Quach’s allusions to other authors and their texts, like that to Georges Perec, add another layer of interest to the novel.

2022-03-06
Previous Post: The Shattered Castle by Jennifer A. Nielsen
Next Post: Orphans of the Tide by Struan Murphy