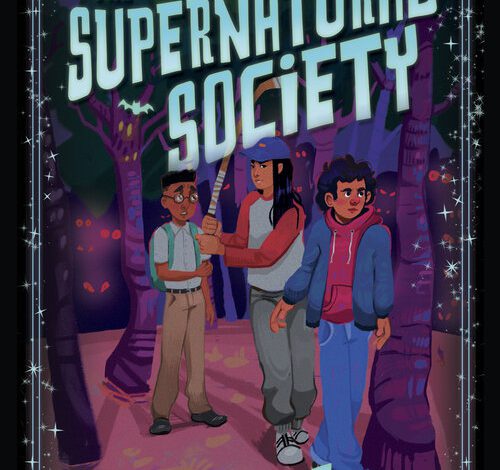 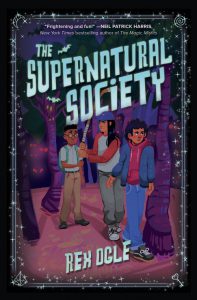 With themes and a style similar to the stories penned by Lemony Snicket, Rex Ogle writes a mystery featuring the unfortunate events of Will Hunter in The Supernatural Society. In what hints at a series, this installment is narrated by a monster.

When Will Hunter’s dad abandons his family, mother and son are forced to move from Brooklyn, New York, to East Emerson, Massachusetts, where Will’s mother secures a job as a nurse. Sixth grader Will hates that he has no choice in this “fresh start” his mother describes. His only solace is in his Saint Bernard, Fitz, a Christmas gift from his father years ago. Although Will wanted a game system, he realizes now that Fitz is way better.

Upon reaching East Emerson, Will feels like he is walking through a nightmare. Where his mother sees a crossing guard, Will sees a minotaur. In fact, many people emerge as monsters. At school, Will sees leprechauns in the lunchroom, goblins in the gym, and bearded banshees in the bathroom. When he explains what he sees to his mother, she grows angry with him about attempting to sabotage their fresh start with his made-up stories.

Meeting Ivy Cross, a mischievous girl who takes pleasure in playing with fireworks, Will discovers an ally. An adopted Korean girl who loves sports, Ivy, too, can see the monsters. As Will’s next door neighbor who has lived in East Emerson her entire life, Ivy becomes Will’s survivalist guide in this odd town filled with “monsters, myths, magic, and mad science” (11).

When Fitz escapes one day, dashing out the door in their strange new town, Will is afraid that his last ties to his dad have disappeared along with his most loyal companion. So, he turns to Ivy for help translating his nightmare trip to a cemetery where he encounters a glowing silver fox who tells Will: “Find the animals, destroy the crown. Save the animals, and save the town.”

In order to do this, the pair needs some history, so they involve Ivy’s brother Linus. While Linus can’t see the monsters, he is a scholar who relies on science and facts. Similar to the character Sheldon Cooper in the sitcom The Big Bang Theory, Linus considers wisdom his companion and friends a distraction. Together, the three tweens form the Supernatural Society to uncover the heart of darkness in East Emerson and to solve the mystery of disappearing pets.

Ogle’s book includes clever codes that require translation as well as illustrations that will intrigue middle-grade readers. It also teaches some key lessons about fear as information that should not be ignored and about facing our phobias through education as a way to understand them and hopefully find reconciliation.

Another moral comes in Ogle’s observation that those who are married to their beliefs close their minds to any extraordinary possibilities. For example, although feelings aren’t facts, they do rule people’s lives, regardless of our inability to prove them.