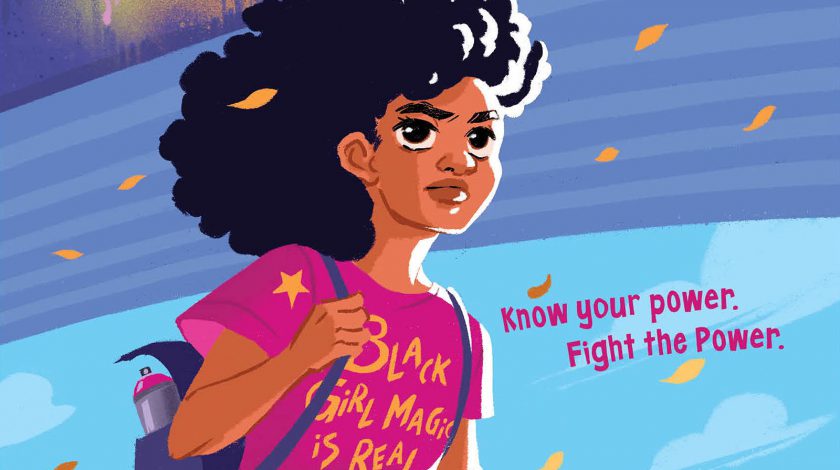 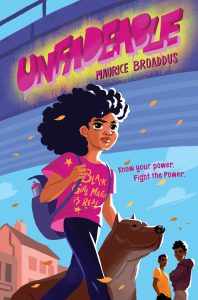 Any reader looking for a book that teaches middle schoolers to talk back to power and to channel anger into productive civic action will find that Unfadeable by Maurice Broaddus is a prime candidate.

Broaddus paints the character of his protagonist, Isabella Fades, aka Unfadeable or Bella, as a confident tagger and painter of murals in her Indiana neighborhood. Both strong and stubborn, thirteen-year-old Bella is unintimidated by adults and fighting to make the world a prettier place. She’s also homeless and hiding that fact from the powers that be. When she approaches the city to secure money for a youth arts program to beautify her community and to bring the neighborhood together through art, she ends up mired in a political showdown, making enemies of politicians and neighborhood street soldiers alike.

Determined never to be a victim or allow someone to steal her power, Bella uses her art to leverage change in her community. Under the mentorship of a sight-challenged former lawyer and private investigator, Menelik Paschall—aka M—Bella learns the power of teamwork and using her voice strategically and her anger as a superpower. Bella takes various tricks from M’s playbook, like how he uses misdirection to distract and throw people off rather than making them suspicious by putting his game out front. M not only tells Bella to be strategic with her actions but to “start where you are and use what you have to do what you can” (68).

M’s assistant, sixteen-year-old Aaries Greyer who appoints himself as Bella’s bodyguard is another character with a small but important part in the story.

Another one of Bella’s mentors and allies is Ms. Campbell. She tells Bella: “You’re going to change the world. I can see that in you. But first you have to figure out who you are and how you want to move through this world” (32).

With the shake of a can of spray paint, Bella sounds her rattle, warning everyone that she’s out and about and wants to be taken seriously, not casually ignored like background noise. After losing her mother to schizophrenia and her father in a fatal car accident, painting keeps Bella sane. Like her art teacher Mr. Ryder, Bella believes artists can change the world. By reclaiming and restoring that which has been abandoned, Bella hopes to return neglect to something beautiful. She hopes to disrupt the connections between power and money to make room for options and freedom.

Together, this group exposes corruption while also maintaining respect. The words of M perhaps strike the truest chord: “We can respect [the] wisdom and experience [of our elders] and still challenge their ideas” (254).

2022-05-17
Previous Post: All That’s Left in the World by Erik J Brown
Next Post: Green Eyes and Ham by Mary Penney