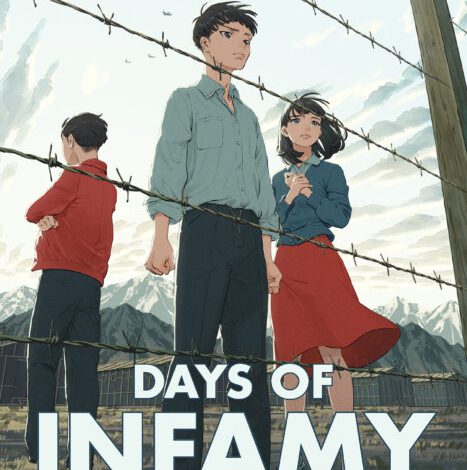 Days of Infamy by Lawrence Goldstone

In his nonfiction book Days of Infamy, Lawrence Goldstone reveals several events from the past that bear remembering, lest they be repeated. The book provides important history for young adults about how a century of bigotry led to Japanese American internment.

With Executive Order 9066 authorized by President Franklin Roosevelt, anyone of Japanese heritage was considered an “alien,” a potential saboteur or enemy agent who could be denied rights otherwise guaranteed under the Constitution. To have one’s rights annulled in the name of national security—as was again done with the Patriot Act after September 11, 2001—is something we should have learned from; yet, here we are.

In 1942, “the United States joined Fascist Italy and Nazi Germany as nations who forcibly deported citizens without trial simply because of the circumstances of their birth” (xii). After these words in the prologue, Goldstone goes on to outline events that tell a story of bigotry, intolerance, oppression, and prejudice. Under the influence of Goldstone’s pen, readers are reminded of the Chinese Exclusion Act of 1882, of the Dred Scott decision, of Korematsu v. United States, and of the race hatred that was often used as a campaign issue. We also receive enlightenment about the April 1906 San Francisco earthquake and the rise of labor unions, strikes, and corruption when “big money bosses” committed extortion and grafting in order to line their pockets at the expense of the working man and woman.

Using fear-mongering and anti-Asian sentiments, White supremacists pushed their agenda and marched to a racist drumbeat. Much of the discriminatory legislation has its roots in California, where many of the Chinese and Japanese settled after coming across the Pacific Ocean. With the Alien Land Law, school segregation, the Johnson-Reed Act, and organizations like the Native Sons of the Golden West, we have recorded evidence of the extent that fear and bigotry can overwhelm common sense, compassion, and basic human decency.

Goldstone closes his book with a sober warning about the necessity of remaining vigilant in protecting democracy, particularly in light of recent Islamophobic rhetoric, use of the term alien, and talk of the border wall because “the country is full” (229). Providing an allusion to Alexander Hamilton’s insistence in Federalist 78, Goldstone reminds readers that the judiciary would be the “people’s branch of government, there to protect the weak against injustices that might be perpetuated by the legislative or the executive” (230) branches of government.  He also nudges us all into understanding the Fourteenth Amendment and civil rights protection.

2022-10-08
Previous Post: In the Beautiful Country by Jane Kuo
Next Post: Future Hero: Race to Fire Mountain by Remi Blackwood