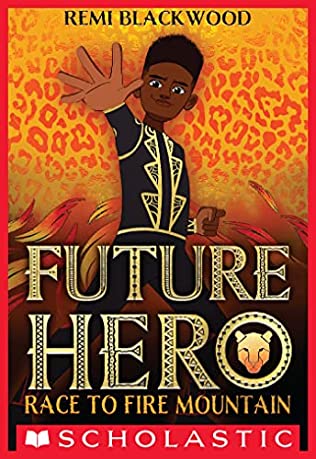 Eleven-year-old Jarell feels awkward and out of place except when he’s drawing. Although his brother Lucas got all the athletic talent, drawing helps Jarell feel in control. Deriving from somewhere deep in his subconscious, he always draws the same futuristic world of towering buildings, powerful warriors, evil sorcerers, and glowing metal gloves with battle tech. To showcase Jarell’s talent, Remi Blackwood’s novel for middle grade readers, Future Hero: Race to Fire Mountain features colors like lava-flow red and obsidian. The first in a series, the book is also peppered with illustrations.

The only place Jarell has ever felt truly at ease is the local barbershop where his cousin Omari hangs Jarell’s art on the walls. In the redesigned barbershop, Omari’s new partner, Legsy, unveils a VIP room where Jarell discovers a portal. In this alternate world, Jarell’s drawings come to life.

Legsy, it turns out, is actually Olegu, the God of Doorways who was sent to Jarell’s world to find the heir of Kundi. “Only a true descendent of Kundi could make a connection with my home realm of Ulfrika. Or work its technology. You are the heir of Kundi” (37), Legsy tells Jarell. Legsy further explains that a descendent of Kundi is the only one who can defeat Ikala and his army of terror.

Although this information makes Jarell feel special for the first time in his life, he is afraid he can’t be who Legsy wants him to be. In response, Legsy tells Jarell that being a hero is a choice. While Legsy gives Jarell a “shape up” with a haircut, Jarell wonders whether it is in his power to save Ayana and Ulfrika just “until Legsy finds the real descendant of Kundi” (42). The haircut—a low fade with tightly shaped coils—features a design: two ovals carved around the back, which in Ulfrika is a symbol of leadership.

Despite not believing he is a leader, Jarell accepts the quest that Legsy proposes and crosses into the world of Ulfrika. Here, he meets Kimisi, a girl he has drawn before who turns out to be an apprentice of Ayana and a griot in training. Together, the two accept Ayana’s assignment to trust one another and their skills, stop Ikala, and find the four iron animals.

While on this quest, Jarell not only discovers that he has already drawn much of what he sees but that some of the technology operates similar to that of a game console. For the first time in his life, Jarell feels connected to his ancestors. “His mother had told him that a lot of their family history had been deliberately erased as part of the atrocity of slavery. But now, Jarell was learning where he came from” (103).