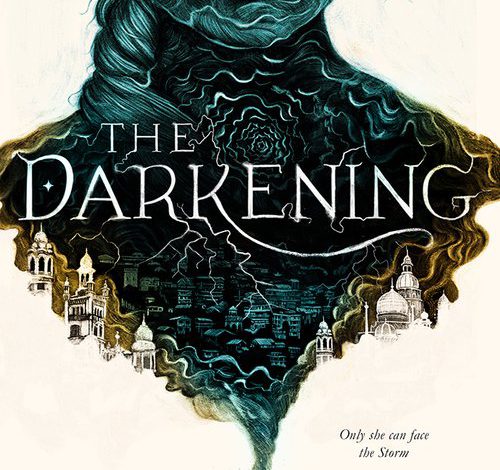 The Darkening by Sunya Mara

Set in a world similar to our current reality but not quite, The Darkening by Sunya Mara is a study of both psychology and sociology. Mara explores the consequences of classism and social hierarchies while also taking a deep dive into the effects of despair, vengeance, hate, pain, and anger. In the process, she also asks some critically important questions worthy of soul-searching.

Seventeen-year-old Vesper Vale is the daughter of revolutionaries and refers to herself as “a hopeful little screwup from the fifth ring” (216). Her father’s fear has kept her safe, but Vesper wonders if it is wrong to want more out of life than safety. Vesper yearns to learn ikonomancy, a tool that belongs to the powerful and one that her father wields with great talent but who has hidden for twelve-years. A form of magic, ikonomancy is the naming of actions applied to things and having the instinct to see beyond what a thing is.

According to Vesper’s father, Alcanar, ikonomancy “takes something from you. Something you can never get back. Not the magic itself, but the power. To affect the world with a word? With just a symbol? It makes men greedy. They begin to think they can rewrite fate” (29).

Still, Alcanar uses his skill to protect Amma and her storm-cursed house guests in the lowest social class. When the Regia—members of the ruling class—discover Alcanar’s actions, they capture him and burn Amma’s Home for the Cursed.

Now homeless, Vesper vows to save her father from Dalca’s clutches. As the prince and next in line to rule, Dalca Zabulon Illusora wears the face of wealth, greed, and power. However, while working undercover with the help of Izamal Dazera, Vesper discovers that Dalca is also a young man with feelings. Just as Vesper buries her sorrow, Dalca buries his fears.

Apprenticed to Casvian Haveli, Vesper is hoping to learn the art of ikons, but Casvian only wants to give her busy-work. In an early exchange, Casvian tells Vesper, “Those are just pretty words.”

In response, she says, “There is nothing ‘just’ about words. Words create meaning from chaos. When you name something—let’s take arrogance as an example—then that thing becomes something else, something that can be understood. That can be beaten” (91).

In her search for where the Regi are keeping Pa, Vesper practices patience and careful observation to discover secret passage ways and to uncover other mysteries. For instance, she learns that Dalca has a goal—“To do the one good thing that I must do, I find myself caught in a thousand small evils” (150).

As she works to unravel the mysteries of these men, Vesper is often reminded of wisdom shared by Amma.  Even though she explains that blood isn’t a leash, that we are not bound to someone who shares our blood; that the choice belongs to the individual, readers will have to decide for themselves.

Another lesson Amma shares is that we all wear a hundred different faces in our lifetimes—“the bawling infant, the happy child, the starry-eyed youth. Each face belongs to a different life” (157).

In addition to interrogating that statement, readers wonder along with Dalca and Vesper whether beauty can be a waste, whether beauty has a point. We also wonder if good intentions come to nothing and to what degree our parents’ choices affect our own lives. Vesper asks, “Had my parents made different choices, would I have been brought up in the safety and security of the third [ring]? Would I have become a great ikonomancer like Pa?” (165).

Not only imprisoned but crippled by fear, grief, and guilt, Alcanar eventually loses hope. He is also cynical about power: “Vesper. See what they’ve done with all the power at their fingertips. You want to give them more? Will more power make them care more? Do more? Be better in any conceivable way?” (223).

Wondering whether her decision is a bad one, Vesper’s ultimate choice is one between hope and fear—with the slimmest hope that she might be able to fight back the Storm. While the author’s intention isn’t entirely clear, an allusion to Robert Frost occurs in the voice of the Storm: “It promises things lovely, dark, and deep” (315). This line may lead the reader to believe that the Storm is the result of despair—a manifestation of hopelessness. The building begins with a darkening, and we’re left with the Storm—what remains when we allow vengeance, hate, anger, pain, and fury to consume us.

Ultimately, Mara’s novel reveals the battle between selfishness and selflessness that we all must confront. We must fight the battle to find balance between good and evil, order and chaos, courage and fear, wisdom and foolishness, creation and destruction. From this battle, Vesper emerges with potential and a subtle power that she describes as love. It’s “an ability to accept and to give and forgive; a transformative power to turn villains into penitents, sufferers into the healed, the abandoned into family” (278). Each must enter the Storm to find such balance while resisting temptation.