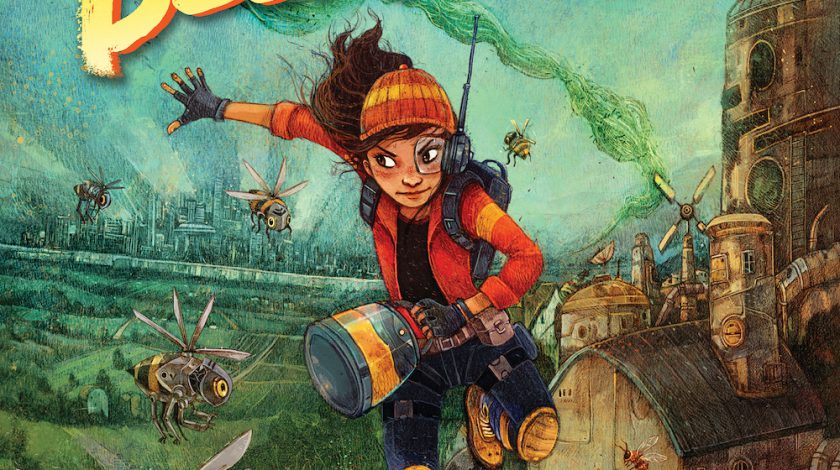 The Last Beekeeper by Pablo Cartaya

For twelve-year-old Yolanda (Yoly) Cicerón, life is all tech and upgrades. Strong, intelligent, and stubborn, Yoly aspires to become a certified neurolink surgeon someday so that she can make some “real money” and live on Remembrance Road where all the designers, programmers, and scientists live. With such a position, she and her sister Cami can escape the poverty of farming the strawberry fields.

In her early twenties, Cami accuses her sister of staring at a screen all day like a mindless drone. Conversely, Yoly claims her sister operates “in the private network of her own mind without letting anybody, not even her own sister, have the access code to connect” (18).

At age seventeen, Cami was forced to become Yoly’s guardian when their parents were exiled from the connected community of Silo. Because Cami won’t talk about the past or her time spent on a Retreat from which she returned with an augmented hand, Yoly is confused. In her mind, technology is used to help humanity. “We program it. We control what it does. Not like nature, which produces whenever it wants” (13).

One with city dreams, the other with country ties, the two girls are at odds. When Yoly decides to go behind her sister’s back without reading the fine print of a scholarship that she accepts so that she can enroll in a Technologically Intuitive Education (TIE) course, she finds herself looking at a debt that she can’t repay. The scholarship price is to serve time on a Retreat, a euphemism for a dangerous expedition into the Dead City, searching for scrap and other recyclables. Cami is determined to prevent her sister from having to fulfill this obligation—given that she didn’t have a guardian’s signature on the contract. Naturally, the System, with Mayor Blackburn at the helm, doesn’t agree. The System not only controls how information is used but controls what information the community can access.

Entering this world created by Cartaya, readers will find significant allusions. For example, the video screens—called VOz—in everyone’s homes not only refer to Frank Baum and peeking behind the curtain to find who manipulates the technology but also to George Orwell and Big Brother’s monitoring everyone’s actions and always listening in. We also see the mind control of video uplinks and the propaganda of socialism, where everything is done for the good of the community: “If we give up everything we own, we can never claim anything as ours. Our home, our lives, everything will belong to Silo” (95).

The citizens of Silo are manipulated with strategies to keep them impoverished and dependent on the System for survival. Using fear tactics and other mind manipulation techniques, the System creates a citizenry of subservient puppets. Eventually, Yoly realizes that “everything Silo does leads back to control. . . . History class tells us that everything was in darkness before Silo brought the light back. . . . Connectivity. The System. The drones. Silo wants us to rely on them. The more centralized the power, the more control the System can have” (167-169).

Because it alerts them to the potential harm from climate change as well as to the manipulation that can result when the government employs scare tactics, this is an important book for young readers. It reminds us all of the importance of critical thinking and that fear is not a reason to stay silent. Cartaya asks the essential question: “How can people ever expect to change their situation when they constantly live in fear of what will happen if they try to change their circumstances?” (175). He also inspires resistance by writing: “Resistance doesn’t die, young lady. . . . It just sleeps until someone wakes it again” (234).

No matter how flashy and technologically advanced a place tries to be, some things can’t be hidden. An informed and curious citizenry will not be easily manipulated. While being connected—whether we look at the World Wide Web, cell phones, or social media—might be efficient, it also makes us easy targets and subject to another kind of darkness. Like all good dystopian fiction, Cartaya’s book reminds readers to think critically about and to uncover the hidden consequences of the technologies we develop. It also reminds us of the value of always asking questions, of always trying to figure out why things are the way they are.