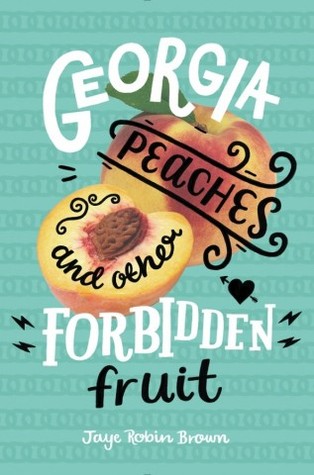 Georgia Peaches and Other Forbidden Fruit

By: Jacquie
In: Realistic Fiction (YA), Romance (YA), Young Adult Book Reviews
With: 0 Comments 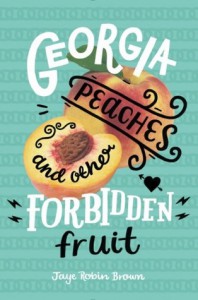 Joanna Gordon is a high school senior, who is looking forward to her last year with her best friend Dana. Joanna and Dana have experienced a lot together; both girls came out of the closet and have stuck by one another when faced with issues regarding their sexuality. Even Joanna’s father accepts who she is, which means a lot because he is an evangelist with his own radio show. However, Joanna is not the only woman in her dad’s life anymore. Elizabeth Gordon, or as Joanna likes to call her, “Three”, is her dad’s new wife. (She’s his third wife, hence her nickname.) Joanna does not mind her dad and Three’s new relationship, even when he announces they are moving to Three’s hometown of Rome, Georgia.  Normally, Joanna would embrace the move, even if it is before her senior year, however her dad is asking a huge favor of her.

Joanna’s father, Reverend Anthony Gordon, is anxious about moving to Rome, Georgia because it is a small town with a small mindset. The community is very conservative and the idea of a reverend with a Christian radio broadcast, who also has a gay, vocal, out of the closet daughter is daunting to him. He asks Joanna to lay low her senior year and to not advertise that she is gay. Although hesitant, Joanna agrees.

Pretending to be a straight girl turns out to be a lot harder than Joanna thought. The situation gets even more confusing when Joanna meets a friend, Mary Carlson. As Joanna starts to develop feelings for Mary, she is torn between following her heart or following the promise she made to her dad to lay low. Mary seems to be sending her subtle hints that she is interested in Joanna as well, or could she be interpreting mixed signals?

Georgia Peaches and Other Forbidden Fruit is an excellent, coming of age narrative, that challenges readers to question their response to diversity, faith, and friendship.