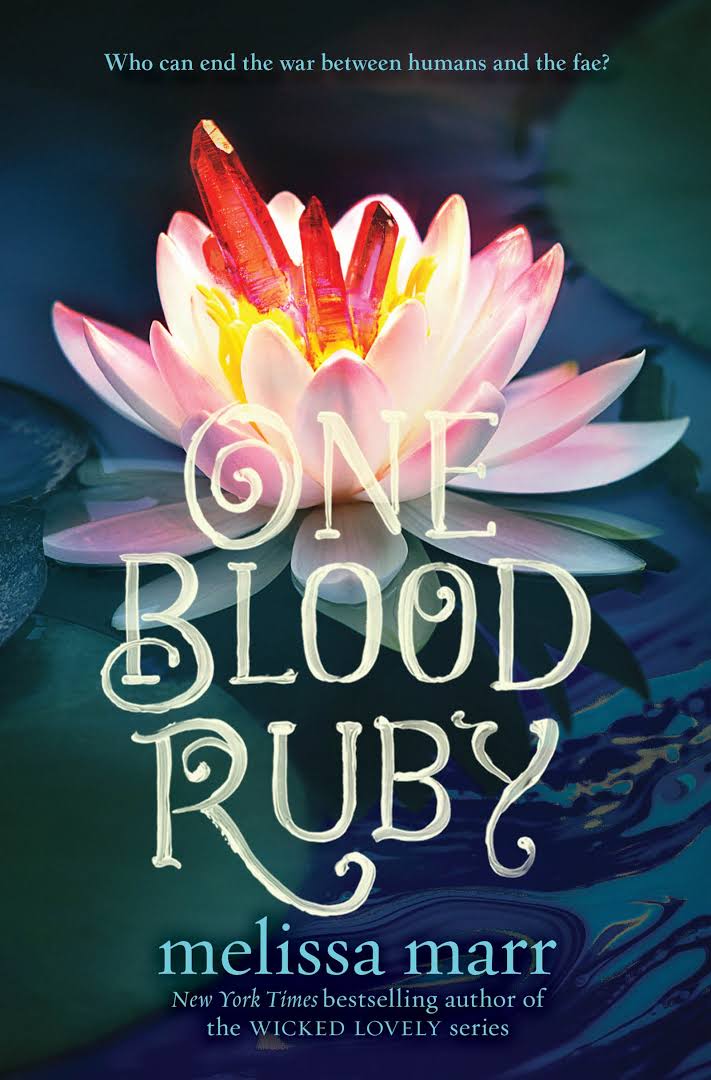 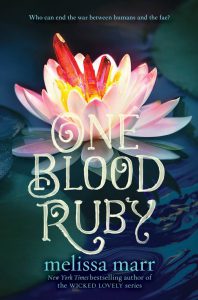 With pollutants and poisons pouring into the earth and air, the humans aren’t so easy to befriend by the faery folk whose hesitation is warranted since their very existence depends on clean air, soil, and water.  Still, LilyDark, who will be crowned the new heir to the throne, is determined to proclaim peace.  In One Blood Ruby, a sequel to Seven Black Diamonds, Melissa Marr continues the saga of the seven half-fae, half-human beings, that the Queen of Blood and Rage has converted into weapons to advance her cause.

But the cessation of war turns out to be far more dangerous than any of the Seven Diamonds had imagined.  Some of the fae would like to kill Lily so she can’t be queen, and humanity wishes to arrest her because she’s half-fae.  Because of their birth, the fae-blood are considered outlaws in the human world: a ridiculous response since “the nature of your blood [isn’t] a choice, but humanity [has] a long history of killing, imprisoning, or fearing others for their race or religion.  Hating the fae-blood was just the latest manifestation of it” (193).

As daughter of the powerful crime lord Nick Abernathy, Lily had been raised around guns, arrests, and the occasional assassination, so she favors peace.  However, a declaration of peace will mean a massive change for both humans and fae.  To accept peace will require the writing of new laws.  For example, tolerance for fae-blood would need to be mandated, and the gates between the worlds would need to be cracked open.  And plenty of adversaries want the courts to remain divided into Seelie and Unseelie factions.

In addition to being a commentary on current society, One Blood Ruby is a love story.  Readers follow the love interests of Alkamy and Zephy, Will and Roan, Lily and Creed, Eilidh and Torquil, and Violet, who resists love.  With exquisite passages and definitions, Marr explores mutual love, familial love, romantic love, and love of a friend.  Lily finds her soul mate in Creed, declaring that “some people simply fit together in a way that no logic could explain and no words could capture. . . . Creed’s very touch made her believe that two people could come together in a way that denied every obstacle or objection. . .  Creed felt like forever” (151-152).  All of the couples share a willingness to die for the other, rather than to see a loved one harmed—a loyalty which makes them reckless.

Even though Lily feels stronger, safer, and nourished in Creed’s arms, her fairy tale isn’t one destined to be defined by midnight dances and charming princes.  With the Queen of Blood and Rage and ruler of the Unseelie court as her grandmother and with the King of Fire and Truth and ruler of the Seelie court as her grandfather, Lily’s future is certain to be one filled with violence and lies and divisive politics.

Lily’s Aunt Eilidh, who has declined the throne in favor of Lily’s coronation, wants most in life to be loved, to have a family, and to protect her people, but her wishes aren’t destined to come true, either, because—being of both courts—she is caught in the middle of the warring factions, caught in a world that values beauty.  And Eilidh—with a maze of scars covering her skin—is neither gorgeous like her father, who rules with smiles, nor terrifying like her mother, who rules with fear.

And family feuds add fuel to the fire, since Lily’s uncles—Nacton, Calder, and Rhys—are unwilling to simply sit on the sidelines.  A declaration of peace implies change, and change is scarier for some than a continuation of conflict.  Clearly, someone wants the courts and the worlds to remain divided.  With its adventure, intrigue, and romance angles, One Blood Ruby offers readers a riveting sequel.