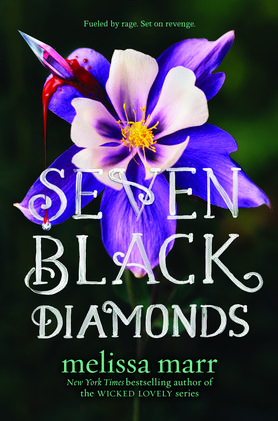 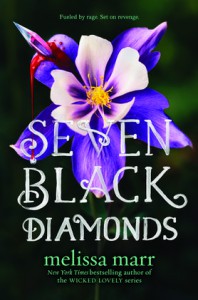 Fueled by fury and fixated on revenge against the recklessness of humanity, the Queen of Blood and Rage—the Unseelie ruler of the fae courts—desires redemption for her lost daughter and for the toxic environment humans have created.  Hoping to destroy humanity from within, she creates a Sleeper cell of half fae, half human beings, and with intense pressure, converts them into weapons.  She calls these jewels in her arsenal the Seven Black Diamonds.  Several of the seven willingly and loyally serve her, but a few resist.

Lily Abernathy, the daughter of Iana and Nicolas Abernathy, is one of the resistant ones.   Born into a future when humans have poisoned the planet, making it nearly uninhabitable to faeries, Lily has led a secluded life hiding her true identity because in this future world, fae-bloods are targets for imprisonment or death.

On her seventeenth birthday, after Lily’s mother has been deceased for twelve years, her crime lord father—head of one of the most successful criminal organizations in the world—hosts a party, lending civility and elegance to their often violent world.  Creed Morrison, Lily’s favorite singer, entertains the guests and shares many truths about Lily’s heritage.  Communication with Creed opens up new realities for Lily, and she realizes that contact with other fae-bloods was Daidí’s gift to her.

Upon further interaction with Creed, Lily learns that he is Seelie—one of the sun-burnished, kinder, gentler fae—rather than Unseelie, the fae more prone to violence and obsessive about revenge.  All fae have an affinity for one of the elements: fire, air, water, earth, but Lily discovers that she has all four.  Now that she has people like her to converse with, she not only better understands her identity but also learns that the fae intend for her to join their vengeful cause against the humans as radical environmentalists.

Lily, who for years has lived by her father’s commandments—with number one being that choices matter—has no desire to be controlled nor to engage in what she considers terrorist activities.  Still, the other six diamonds: Creed, Zephry, Roan, Alkamy, Will, and Violet need her bold, assertive leadership.  Can she stop the war, and if so, at what cost to her freedom and her future?

Although the faery-human war provides the core of the conflict in Melissa Marr’s book Seven Black Diamonds, the book also reveals some interesting truths about motivation, secrets, love, a kiss’s ability to communicate,  individual complexity, and environmentalism: