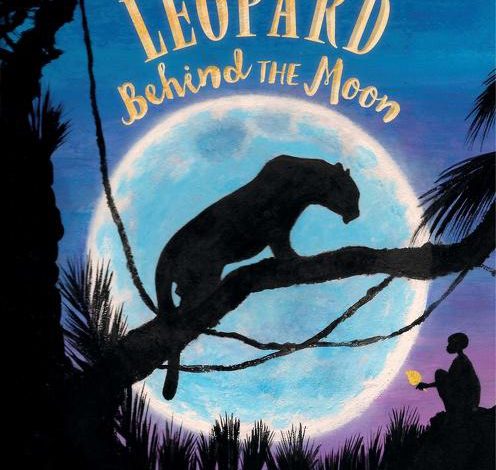 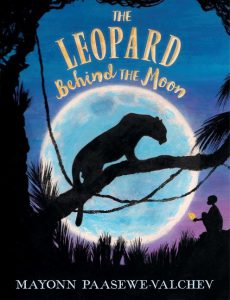 Told in three parts, The Leopard Behind the Moon is written like an oral legend. Mayonn Paasewe-Valchev sets her tale in Sesa—a faraway place amid the marula trees where a group of people live in a village with strict laws about not going out at night or opening the magical door that protects them all.

However, on the three-year anniversary of his father’s death, ten-year-old Ezomo sees the leopard that killed his father and feels compelled to follow it. His foolhardiness involves two of his friends: Muja and Chimama, and the three have quite an adventure.  Ezomo discovers that although the night is dark and dangerous and filled with uncertainty, it is also exciting and filled with promise, for he has his two friends who are helping him to find a way to save his dying mother.

Each of the children is seeking answers and lamenting how different things would be if Chimama’s mother, Chima, could cook, if Ezomo’s father were alive and his mother well, and if Muja’s father, Toba, could speak. After all, words carry power in that they give orders and teach others.

Although the village elders consider Ezomo useless and cowardly, he proves them wrong in their judgment.  With his discoveries beyond the magical door, Ezomo confirms that he is kind, thoughtful, compassionate, and wise. He also comes to understand that his past is not his present and that he has to accept the present—despite its ugliness—since it is all he has and the load of today is plenty enough to carry without the burden of yesterday. He also learns the power of hope and faith and that the heart will not heal if we cast our hurt on other people.