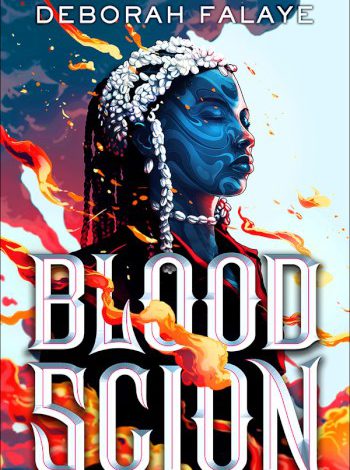 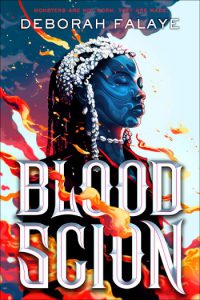 Although an important book about exploitation, genocide, and identity—one inspired by Yoruba-Nigerian mythology—Blood Scion by Deborah Falaye is difficult to read. Trapped in a world of monsters who will eat her alive should they realize she’s the enemy, Sloane Shade lives under Lucis rule and tyranny. Ten times more horrifying than the Hunger Games by Suzanne Collins, the ruling class and its military are pitting children against children, training them to kill or be killed.

Bound by the Lucis law regarding conscription, when a child turns fifteen, he or she reports for training for a war against the Shadow Rebels. Such is the fate of Sloane from Agbajé village. She is plucked from her home—from her beloved Baba and from Luna Herrera who is like a sister to her—and  transported to Fort Regulus where she is trained to commit unspeakable horrors, to destroy people like her—those with magic. The Lucis have already taken her momma, and Sloane is determined to protect Baba and to find the truth about Momma, whose body she has been unable to recover. Momma always told her: “You are more than what they say you are, Sloane (70). . . . They’d sooner destroy you for fear of what they do not understand” (85).

Sloane is a Scion, a descendent of Shango, the god of heat and fire who is her blood deity. A living inferno, Sloane’s àse rages inside her, “a fire born of Olodumaré’s divine energy, flaming bones and blood underneath [her] skin” (9). All her life, Slaone has been told to hide her magic, to suppress her àse in order to protect herself from the wrath of the Lucis and to keep her family safe. Although she has not yet learned to harness her àse, Sloane can summon fire.

Reminiscent of other genocides, Sloane has grown without an identity. Forced to live without a culture and to take on names that embody nothing of who the Yoruba people are, Sloane feels fragmented. “I am only half of what I really am. I cannot afford to be whole” (16). Cutting a divide between who she is and who she must be in order to live, Sloane struggles with her identity. Taught to believe her magic is ugly, that she is something to be hated, feared, and persecuted, Sloane wishes to be rid of this terrible curse: “Make me normal. Make me whole. Make me like them. Make me worthy of life” (195).

When she arrives at Fort Regulus, Sloane hears a revisionist history: “Scions have always been this continent’s greatest tyrants. . . . When our ancestors first arrived in Nagea, it was Scions who fought to keep them from establishing a new settlement on this land. They feared us, feared our advanced weaponry, feared what we could do to their devilish practices and rituals, and so they tried to eliminate us” (70).

Slaone’s squad leader at the fort, Dane Gray tells her: “You’re useless to them whole. . . . Great soldiers are made from pieces of their broken selves, and the most vulnerable children are always the easiest to use, abuse, and destroy. . . . They will destroy every last semblance of your humanity, and you cannot fight it, you cannot change it. Because from now on, they own you” (75). At Fort Regulus, children are forced to conform. Their vulnerability is exploited, and they are molded into war machines, ready to carry out commands without erring, “ruined for the glory of a monarchy that cares nothing about whether [they] live or die” (119). The monarchy takes its strength from dividing Nagea.

But, Sloane has always been taught “to fight for those too weak to raise their fists, scream for those too afraid to find their voice, and stand for those too tired to rise on their feet” (181). So, it’s no surprise that she resists. Yet, the cost is high.

As Falaye spins this dark fantasy debut novel, she leaves behind several observations about corruption—about those with a predatory appetite for power. She also shares key morals—about how sometimes the things we don’t want to do are exactly what needs to be done and about how guilt doesn’t save; it only fetters.  Falaye also outlines the problem with revenge: “It births such a ravenous beast . . . that not even the risk of failure is enough to sate its cravings” (323). Another moral comes in the form of human observation: “Treat something like a monster, and it will certainly learn to become a monster” (325).

Like any talented author, Falaye invites readers to ask important questions: Does motive justify savagery? Does fighting for family, hope, change, and freedom separate a monster from a hero? Readers will also wonder whether they share Sloane’s hunger to live, asking themselves to what extent they might push themselves to avoid pain, death, and suffering. Is this hunger a poisonous one, one with the ability to also kill hope, strength, and humanity?

Falaye writes from the belief that “only the dead have truly earned the right to do nothing. As long as you live and walk this earth, you must make a mark” (348). Sloane wishes not only to gain her freedom but to “reclaim every piece of culture the Lucis have stolen from [her] and to end the corruption of children. Ultimately, Falaye imparts the importance of embracing one’s identity, since to deny it has grave consequences.